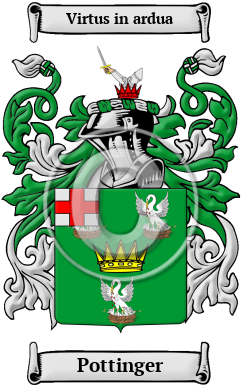 Pottinger is an old Anglo-Saxon name that was given to a person who was a maker and seller of soup which is derived from the Old French word potagier, which meant "maker and seller of pottage." Pottage is a thick soup or broth. The original bearer of this surname may very well have been an itinerant peddler traveling with a fair. It was common to have food sellers traveling with medieval fairs; pottage was a popular food stuff to be found at these events. A good literary example of this type of trade appears in the beginning of Thomas Hardy's book The Mayor of Casterbridge, where the "furmity woman" precipitates the events of the novel by selling soup laced with alcohol to Henchard, who in later years becomes the Mayor of the title of the book. The word pottinger is Scottish for an apothecary. In the Household Book of James V. of Scotland, one of the king's horses, set apart for carrying the drugs of the royal household, is jocosely known by this name: - 'uno equo pharmacopile, vulgo de Pottinger.' " [1]

Early Origins of the Pottinger family

The surname Pottinger was first found in various shires throughout ancient England. The Writs of Parliament may have the first entry for the name as it lists Walter le Potager, 1303. Kirby's Quest lists John le Potager, Somerset, 1 Edward III [2] and the Freemen of York listed Simon de Wederhale, potager, 2 Edward III. [3] For these last two entries, the reader needs to understand that many early rolls merely had entries for each year of the king's reign as it took years to complete a given rolls. By example, "1 Edward III" meant "during the first year of King Edward III's reign."

Quite unexpectedly, Scottish entries for the name were later. "The surname appears in Scotland to have been confined mainly to Orkney and Shetland. Alexander Potyngeir and Thome Potyngeir were jurors on an inquest held at Sabay, Orkney, 1522. Alexander Potinger was one of the witnesses to a deed of sale in Orkney, 1552." [5]

Early History of the Pottinger family

The English language only became standardized in the last few centuries; therefore, spelling variations are common among early Anglo-Saxon names. As the form of the English language changed, even the spelling of literate people's names evolved. Pottinger has been recorded under many different variations, including Pottinger, Potinger, Pottingal, Pottingale and others.

Distinguished members of the family include Agnes Potten (died 1556), one of two English women of Ipswich who were imprisoned and burned at the stake in Ipswich during the Marian persecutions, both are commemorated among the Ipswich Martyrs. John Potenger or Pottinger (1647-1733), was a master in chancery and author, the son of John Potenger, D.D...
Another 54 words (4 lines of text) are included under the topic Early Pottinger Notables in all our PDF Extended History products and printed products wherever possible.

Migration of the Pottinger family to Ireland

Some of the Pottinger family moved to Ireland, but this topic is not covered in this excerpt.
Another 52 words (4 lines of text) about their life in Ireland is included in all our PDF Extended History products and printed products wherever possible.

Pottinger migration to the United States +

For many English families, the political and religious disarray that shrouded England made the far away New World an attractive prospect. On cramped disease-ridden ships, thousands migrated to those British colonies that would eventually become Canada and the United States. Those hardy settlers that survived the journey often went on to make important contributions to the emerging nations in which they landed. Analysis of immigration records indicates that some of the first North American immigrants bore the name Pottinger or a variant listed above:

Pottinger Settlers in United States in the 17th Century

Pottinger Settlers in United States in the 18th Century

Pottinger Settlers in United States in the 19th Century

Pottinger Settlers in Australia in the 19th Century