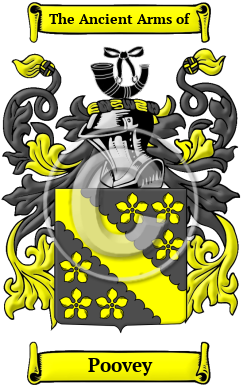 The earliest origins of the Poovey surname date from the ancient Anglo-Saxon culture of Britain. Their name reveals that an early member was a person with the characteristics of an owl. Often nicknames described strong traits or attributes that people wished to emulate in a specific animal. In the pre-Christian era, many pagan gods and demigods were believed to be a mixture of animals and humans, such as the Greek god Pan who was the god of flocks and herds and was represented as a man with the legs, horns and ears of a goat. In the Middle Ages, anthropomorphic ideas, which attributed human qualities and form to gods or animals, were held about the characters of other living creatures. They were based on the creature's habits. Moreover, these associations were reflected in folk-tales, mythology, and legends which portrayed animals behaving as humans.

Early Origins of the Poovey family

The surname Poovey was first found in Gloucestershire where the name Povey is a provincialism for an owl. [1]

Early History of the Poovey family

It is only in the last few hundred years that the English language has been standardized. For that reason, early Anglo-Saxon surnames like Poovey are characterized by many spelling variations. As the English language changed and incorporated elements of other European languages, even literate people changed the spelling of their names. The variations of the name Poovey include: Povey, Povy and others.

Notables of this surname at this time include: Thomas Povey (1613-1705) FRS, London merchant and politician, active in colonial affairs from the 1650s, he was a member from 1660 of Charles II's Council for Foreign Plantations. Charles Povey (c. 1652-1743), was an English miscellaneous writer...
Another 44 words (3 lines of text) are included under the topic Early Poovey Notables in all our PDF Extended History products and printed products wherever possible.

In the United States, the name Poovey is the 17,190th most popular surname with an estimated 2,487 people with that name. [2]

Migration of the Poovey family to Ireland

Some of the Poovey family moved to Ireland, but this topic is not covered in this excerpt.
Another 56 words (4 lines of text) about their life in Ireland is included in all our PDF Extended History products and printed products wherever possible.

Migration of the Poovey family

Many English families tired of political and religious strife left Britain for the new colonies in North America. Although the trip itself offered no relief - conditions on the ships were extremely cramped, and many travelers arrived diseased, starving, and destitute - these immigrants believed the opportunities that awaited them were worth the risks. Once in the colonies, many of the families did indeed prosper and, in turn, made significant contributions to the culture and economies of the growing colonies. An inquiry into the early roots of North American families has revealed a number of immigrants bearing the name Poovey or a variant listed above: Anne Povey and her husband who settled in Barbados in 1697; James, John and William Povey arrived in Philadelphia between 1174 and 1852.