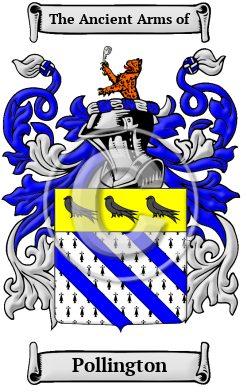 The ancestors of the bearers of the Pollington family name are thought have lived in ancient Anglo-Saxon England. They were first found in Pocklington, in the East Riding of Yorkshire. The place-name Pocklington is derived from the Old English personal name Pocela and the Old English word tun, which means farm or settlement. The place-name as a whole means "farm of a man called Pocela." Pocklington was in the East Riding of Yorkshire in the Middle Ages; since the English Government reorganized the county system in 1974, it has been in Humberside. Pocklington was recorded as Poclinton in the Domesday Book compiled in 1086.

Early Origins of the Pollington family

The surname Pollington was first found in Yorkshire where they held a family seat from early times and their first records appeared on the early census rolls taken by the early Kings of Britain to determine the rate of taxation of their subjects.

Early History of the Pollington family

This web page shows only a small excerpt of our Pollington research. Another 108 words (8 lines of text) covering the years 1642, 1600 and 1621 are included under the topic Early Pollington History in all our PDF Extended History products and printed products wherever possible.

Until quite recently, the English language has lacked a definite system of spelling rules. Consequently, Anglo-Saxon surnames are characterized by a multitude of spelling variations. Changes in Anglo-Saxon names were influenced by the evolution of the English language, as it incorporated elements of French, Latin, and other languages. Although Medieval scribes and church officials recorded names as they sounded, so it is common to find one person referred to by several different spellings of his surname, even the most literate people varied the spelling of their own names. Variations of the name Pollington include Pocklington, Pollington and others.

Another 49 words (4 lines of text) are included under the topic Early Pollington Notables in all our PDF Extended History products and printed products wherever possible.

Migration of the Pollington family to Ireland

Some of the Pollington family moved to Ireland, but this topic is not covered in this excerpt. More information about their life in Ireland is included in all our PDF Extended History products and printed products wherever possible.

Pollington Settlers in Australia in the 19th Century

Pollington Settlers in West Indies in the 17th Century