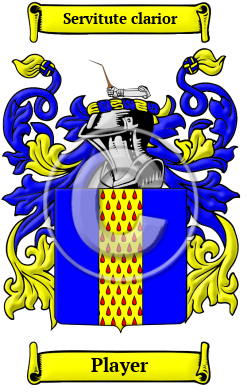 The name Player comes from one of the family having worked as a person who worked as a player, which was originally derived from the Old English word plegere. In this case the Player surname referred to those individuals who were musicians or actors who played for a living. [1]

While most sources believe the name is Saxon, one source claims that the name may have been Norman as the Magni Rotuli Scaccarii Normanniae lists Andreas Placitor in Normandy (1180-1195.) [2]

Early Origins of the Player family

The surname Player was first found in Middlesex where they held a family seat from early times and their first records appeared on the early census rolls taken by the early Kings of Britain to determine the rate of taxation of their subjects.

Early History of the Player family

Spelling variations in names were a common occurrence before English spelling was standardized a few hundred years ago. In the Middle Ages, even the literate spelled their names differently as the English language incorporated elements of French, Latin, and other European languages. Many variations of the name Player have been found, including: Player, Pleyer, Players and others.

Notables of this surname at this time include: Sir Thomas Player (1608-1672), English Chamberlain of London, son of Robert Player of Canterbury. He was one of the leading residents in Hackney, where he had a large house in Mare Street, and he soon occupied a prominent position in the city. He became a member of the Haberdashers' Company, and was elected by the livery chamberlain of London on 20 Oct. 1651. On 5 July 1660 he...
Another 75 words (5 lines of text) are included under the topic Early Player Notables in all our PDF Extended History products and printed products wherever possible.

In the United States, the name Player is the 6,020th most popular surname with an estimated 4,974 people with that name. [3]

Player migration to the United States +

Families began migrating abroad in enormous numbers because of the political and religious discontent in England. Often faced with persecution and starvation in England, the possibilities of the New World attracted many English people. Although the ocean trips took many lives, those who did get to North America were instrumental in building the necessary groundwork for what would become for new powerful nations. Among the first immigrants of the name Player, or a variant listed above to cross the Atlantic and come to North America were :

Player Settlers in United States in the 17th Century

Player Settlers in United States in the 19th Century

Player Settlers in Australia in the 19th Century

Player Settlers in New Zealand in the 19th Century