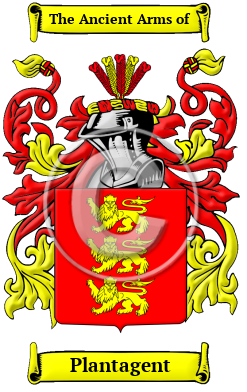 The name Plantagent reached English shores for the first time with the ancestors of the Plantagent family as they migrated following the Norman Conquest in 1066. Plantagent is a name for a gardener as the name was originally derived from the Old English word plant meaning plant, or young tree.

Early Origins of the Plantagent family

The surname Plantagent was first found in London where they held a family seat being descended from Fulk, the Count of Anjou, whose descendants were exemplified by the Emperor, Henry V of Germany. Geoffrey Plantagenet (1113-1151), Count of Anjou, was the father of Henry II of England. Henry ascended the English throne and thus began the Plantagenet dynasty. He bore the three royal lines which continued until the time of Edward III who added a crest of another lion. The eventual heiress of this house was the Princess Elizabeth of York, daughter of Edward IV, and Queen of Henry VII. Many junior lines abounded.

The parish of Great Sandall in Yorkshire has an interesting footnote about this illustrious family. "This place is of high antiquity, and was long the baronial seat of the lords of Wakefield, of whom John Plantagenet, the last Earl of Warren, erected a strong castle here about the year 1320, which in the reign of Edward III. was occupied by Edward Balliol, one of the competitors for the throne of Scotland. The castle became the property of Richard Plantagenet, Duke of York, who fell in the battle of Wakefield, in 1460; and was subsequently the residence of his son, Richard, Duke of Gloucester, afterwards Richard III. During the war in the reign of Charles I., it was held for the king, but was ultimately surrendered to the republican forces in 1645, and in the following year was demolished by order of parliament; the remains are very inconsiderable, scarcely serving to point out the site." [1]

Early History of the Plantagent family

This web page shows only a small excerpt of our Plantagent research. Another 128 words (9 lines of text) covering the years 153 and 1533 are included under the topic Early Plantagent History in all our PDF Extended History products and printed products wherever possible.

Multitudes of spelling variations are a hallmark of Anglo Norman names. Most of these names evolved in the 11th and 12th century, in the time after the Normans introduced their own Norman French language into a country where Old and Middle English had no spelling rules and the languages of the court were French and Latin. To make matters worse, medieval scribes spelled words according to sound, so names frequently appeared differently in the various documents in which they were recorded. The name was spelled Plantaggenett, Plantagenet, Plant, Plante and others.

More information is included under the topic Early Plantagent Notables in all our PDF Extended History products and printed products wherever possible.

Migration of the Plantagent family to Ireland

Some of the Plantagent family moved to Ireland, but this topic is not covered in this excerpt. More information about their life in Ireland is included in all our PDF Extended History products and printed products wherever possible.

Migration of the Plantagent family

Because of this political and religious unrest within English society, many people decided to immigrate to the colonies. Families left for Ireland, North America, and Australia in enormous numbers, traveling at high cost in extremely inhospitable conditions. The New World in particular was a desirable destination, but the long voyage caused many to arrive sick and starving. Those who made it, though, were welcomed by opportunities far greater than they had known at home in England. Many of these families went on to make important contributions to the emerging nations of Canada and the United States. Analysis of immigration records indicates that some of the first North American immigrants bore the name Plantagent or a variant listed above: Thomas Plant who settled in Virginia in 1670; Elizabeth Plant settled in Maryland in 1723; Matthew Plant settled in Virginia in 1635; James Plant settled in Philadelphia, Pennsylvania in 1841.