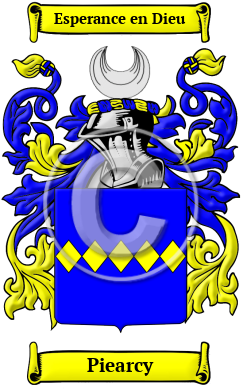 Piearcy is one of the thousands of new names that the Norman Conquest brought to England in 1066. The Piearcy family lived in Yorkshire and Lincolnshire. They claim the same ancestry as Tesson and Marmion in Normandy, both relatively rare names today. One of the oldest records was Ralph Tesson who was found in Anjou in the 10th century. He acquired a barony in Normandy and founded the abbey of Fontenay. From this House, descended the Marmions, of whom William Marmilon on Fontenay (a Tesson estate) was listed. It is generally thought that the Percys probably derive from Ernegis Tesson. [1] "The arms of these families show their common origin." All bear a fesse with the Percys having a fesse indented. [1]

Early Origins of the Piearcy family

The surname Piearcy was first found in Yorkshire and Lincolnshire where "William de Perci, who with his brother Serlo, assisted in the Conquest of England, appears in the Domesday [Book] as tenant in capite in many counties, especially in those of York and Lincoln.

Perci is the name of a parish and canton near St. Lo, in Normandy, the ancient fief on the family." [2] Sawley in the West Riding of Yorkshire was an early home to the family. "It belonged to a Cistercian abbey in honour of the Blessed Virgin, founded here in 1146, by William de Percy, and the revenue of which, at the Dissolution, was estimated at £221." [3]

Thirsk in the North Riding of Yorkshire was home to another branch of the family. "In the reign of Henry VII., during a popular commotion, Henry Percy, Earl of Northumberland, and lieutenant of this county, is said to have been put to death here, beneath a very ancient elm-tree, which formerly grew on Elm Green." [3]

Again in North Yorkshire, more early records of the family were found in the parish of Lofthouse. "This place, in the Domesday Survey Lochtushum, was granted by the Conqueror to Hugh Lupus, Earl of Chester, who soon afterwards transferred it to the Percy family, of whom William de Percy, the third Baron, in 1133 founded at Handall, in the parish, a priory for Benedictine nuns." [3]

And yet another branch of the family was found in Wressel in the East Riding of Yorkshire. "Wressel Castle was built by Thomas Percy, Earl of Worcester, who was made prisoner at the battle of Shrewsbury, and afterwards beheaded; this once princely mansion continued to be a seat of the family till the reign of Charles I., when it was dismantled by order of the parliament." [3]

Early History of the Piearcy family

Multitudes of spelling variations are a hallmark of Anglo Norman names. Most of these names evolved in the 11th and 12th century, in the time after the Normans introduced their own Norman French language into a country where Old and Middle English had no spelling rules and the languages of the court were French and Latin. To make matters worse, medieval scribes spelled words according to sound, so names frequently appeared differently in the various documents in which they were recorded. The name was spelled Percy, Percie and others.

Outstanding amongst the family at this time was Sir Henry Percy (1364-1403), commonly known as Sir Harry Hotspur, slain leading the losing side at the Battle of Shrewsbury in 1403; and Thomas Percy, 1st Earl of Worcester, (1343-1403), English medieval nobleman best known for taking part in the rebellion with his nephew Henry Percy, known as 'Harry Hotspur', with his elder brother, Henry Percy, 1st Earl of Northumberland Alan Percy (died 1560), was Master of St. John's College, Cambridge, third son of Henry Percy, fourth Earl of Northumberland. Thomas Percy (c.1560-1605), was a member of the Gunpowder Plot. Henry Percy, 1st Earl...
Another 125 words (9 lines of text) are included under the topic Early Piearcy Notables in all our PDF Extended History products and printed products wherever possible.

Migration of the Piearcy family

Because of this political and religious unrest within English society, many people decided to immigrate to the colonies. Families left for Ireland, North America, and Australia in enormous numbers, traveling at high cost in extremely inhospitable conditions. The New World in particular was a desirable destination, but the long voyage caused many to arrive sick and starving. Those who made it, though, were welcomed by opportunities far greater than they had known at home in England. Many of these families went on to make important contributions to the emerging nations of Canada and the United States. Analysis of immigration records indicates that some of the first North American immigrants bore the name Piearcy or a variant listed above: George Percie settled in Virginia in 1607; thirteen years before the "Mayflower"; John Percie settled in Virginia in 1635; Robert Percy settled in Virginia in 1634.