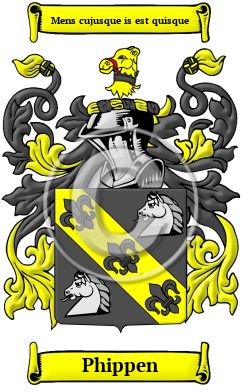 Early Origins of the Phippen family

The surname Phippen was first found in Normandy where they claim descent from the founders of the Carolingian monarchy, Pepin d'Heristal (c. 635-714), and Pepin le Bref (Pippin the Younger.) Both claim descent from Pepin I (also Peppin, Pipin, or Pippin) of Landen (c. 580-640), also called Pepin the Elder or the Old, was the Mayor of the Palace of Austrasia from 623 to 629.

Early History of the Phippen family

Notable in the family at this time was Talbot Pepys (1583-1666), English politician who sat in the House of Commons in 1625; Sir Richard Pepys (1589-1659), an English lawyer and politician, Member of Parliament for Sudbury in 1640 and was Lord Chief Justice of Ireland; Roger Pepys (1617-1688), an English lawyer and politician; and Samuel Pepys (1633-1703) diarist and Admiralty official. Under the patronage of the Earl of Sandwich, his father's cousin, he rose rapidly in the naval service and became secretary to the Admiralty...
Another 84 words (6 lines of text) are included under the topic Early Phippen Notables in all our PDF Extended History products and printed products wherever possible.

Migration of the Phippen family to Ireland

Some of the Phippen family moved to Ireland, but this topic is not covered in this excerpt.
Another 32 words (2 lines of text) about their life in Ireland is included in all our PDF Extended History products and printed products wherever possible.

Phippen migration to the United States +

Analysis of immigration records indicates that some of the first North American immigrants bore the name Phippen or a variant listed above:

Phippen Settlers in United States in the 17th Century

Phippen Settlers in United States in the 19th Century

Phippen Settlers in New Zealand in the 19th Century