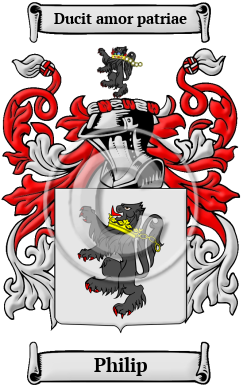 The ancestors of the bearers of the name Philip were the ancient Britons that inhabited in the hills and Moors of Wales. This surname was derived from the personal name Philip. This name, which was usually Latinized as Philippus, was originally derived from the Greek name Philippos. This Greek name was composed of the words "philein," which means "to love," and "hippos," which means "horse." The personal name Philip owed its popularity to the medieval romances about Alexander the Great, whose father was Philip of Macedon.

Early Origins of the Philip family

The surname Philip was first found in Kent, where legend has it that the family (but not the surname) is descended from Maximus, the Briton, Roman Emperor from 383 until his death in 388, and the King of Britain, when he married the daughter of Octavius, King of the Britons. Later the family was forced back into Wales by the invading Saxons, where they traditionally claim descent from Tudwal (c.AD 528-564) "of the wounded knee," a descendant of Rhodri Mawr, first King of Wales.

Early History of the Philip family

There are relatively few surnames native to Wales, but they have an inordinately large number of spelling variations. Early variations of Welsh surnames can be explained by the fact that very few people in the early Middle Ages were literate. Priests and the few other literate people were responsible for recording names in official documents. And because most people could not specific how to properly record their names it was up to the individual recorder of that time to determine how a spoken name should be recorded. Variations due to the imprecise or improper recording of a name continued later in history when names originally composed in the Brythonic Celtic, language of Wales, known by natives as Cymraeg, were transliterated into English. Welsh names that were documented in English often changed dramatically since the native language of Wales, which was highly inflected, did not copy well. Occasionally, however, spelling variations were carried out according to an individual's specific design: a branch loyalty within the family, a religious adherence, or even patriotic affiliations could be indicated by minor variations. The spelling variations of the name Philip have included Phillips, Philips, Phillip, Philip, Pilip, Pillips, Fillip, Filip, Filips, Phillipes, Philipes, Phillup, Philups, Fillups, Filups, Pilups, Pillups, Fulop and many more.

Prominent amongst the family during the late Middle Ages was Sion Phylip (1543-1620), Welsh poet, son of Phylip ap Morgan; Sir Robert Phelips (1560-1614), English Speaker of the House of Commons and master of the rolls, was fourth and youngest son of Thomas Phelips (1500-1588) of Montacute, Somerset. Miles Philips (fl. 1587), was an English mariner with Captain John Hawkyns on his voyage of 1568. He and another 114 were put ashore near Panuco, Mexico. They were captured and indentured as domestic servants. Philips also worked in a mine where over four years accumulated some four thousand pieces of eight. During the...
Another 270 words (19 lines of text) are included under the topic Early Philip Notables in all our PDF Extended History products and printed products wherever possible.

Migration of the Philip family to Ireland

Some of the Philip family moved to Ireland, but this topic is not covered in this excerpt.
Another 109 words (8 lines of text) about their life in Ireland is included in all our PDF Extended History products and printed products wherever possible.

Philip migration to the United States +

During the latter half of the 19th and the beginning of the 20th century, the people of Wales journeyed to North America to find a new life. They made major contributions to the arts, industry and commerce of both Canada and the United States, and added a rich cultural heritage to their newly adopted societies. A look at the immigration and passenger lists has shown a number of people bearing the name Philip:

Philip Settlers in United States in the 18th Century

Philip Settlers in United States in the 19th Century

Philip Settlers in United States in the 20th Century

Philip Settlers in Australia in the 18th Century

Philip Settlers in Australia in the 19th Century

Philip Settlers in New Zealand in the 19th Century