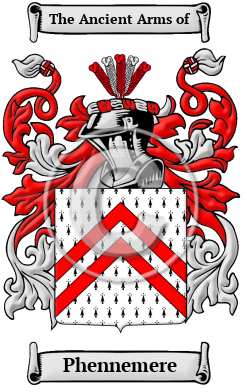 The ancient Anglo-Saxon culture of England produced the name of Phennemere. It was given to a person who was perceived to be splendid and very likable. The surname is derived from the Old French words fin, a nickname for a very elegant man and amour, which is means love.

Early Origins of the Phennemere family

The surname Phennemere was first found in Devonshire where "Sir Gilbert Finemer or Finemore held half a knight's fee of the Honour of Clare, temp. Henry II.; and bore the red chevrons of his suzerain on a field of ermine. The name is also found at Hinksey in Berkshire; and in the church of St. Lawrence at Reading there is a monument to the memory of one of this family, with the following quaint inscription: 'Under they feet, reader, lie the remains of Richard Fynemore, his father's Benjamin, and his brother's Joseph; who coming from Oxon to the burial of a friend, found here his own grave, 1664.' The manor of Tingewick in Buckinghamshire was given in 1210 by this family to the monastery de Monet Rothomago in Normandy. It had passed to them from the Lacys before the reign of Henry III. They probably gave their name to the neighbouring village of Finmore in Oxfordshire. Hugh de Finemer was Vicar of Shabbington, Buckinghamshire in 1348." [1]

Early History of the Phennemere family

This web page shows only a small excerpt of our Phennemere research. Another 224 words (16 lines of text) covering the years 1208, 1349, 1539, 1507 and 1673 are included under the topic Early Phennemere History in all our PDF Extended History products and printed products wherever possible.

One relatively recent invention that did much to standardize English spelling was the printing press. However, before its invention even the most literate people recorded their names according to sound rather than spelling. The spelling variations under which the name Phennemere has appeared include Fennimore, Fenemere, Finimore, Finnimore, Fenimore, Fenimere, Finmore and many more.

More information is included under the topic Early Phennemere Notables in all our PDF Extended History products and printed products wherever possible.

Migration of the Phennemere family

At this time, the shores of the New World beckoned many English families that felt that the social climate in England was oppressive and lacked opportunity for change. Thousands left England at great expense in ships that were overcrowded and full of disease. A great portion of these settlers never survived the journey and even a greater number arrived sick, starving, and without a penny. The survivors, however, were often greeted with greater opportunity than they could have experienced back home. These English settlers made significant contributions to those colonies that would eventually become the United States and Canada. An examination of early immigration records and passenger ship lists revealed that people bearing the name Phennemere arrived in North America very early: Francis Finmore who settled in Georgia in 1775; John Finnemore arrived in Pennsylvania in 1861.