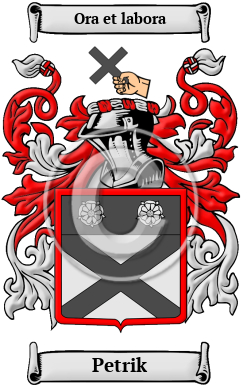 The name Petrik was carried to England in the enormous movement of people that followed the Norman Conquest of 1066. It comes from the given name Patrick. It was largely as a result of the fame of the 5th century Romano British saint of this name that Patrick was such a popular given name in the Middle Ages. It derives from the Latin Patricus, meaning the son of a noble father, a member of the patrician class, and a member of the Roman hereditary aristocracy.

They claim descent from Patrick de la Lande who was from La Lande near Caen in Normandy. "William Patrick de la Lande is mentioned by Wace as the entertainer of Harold during his visit to Normandy, and as challenging him to combat at Hastings for breach of his oath." [1]

To better understand this quotation, the reader needs to know that Wace (c. 1110-1174) was a Norman poet, born in Jersey. His "Roman de Brut," was a verse history of Britain, based on the Historia Regum Britanniae by Geoffrey of Monmouth. In many ways, Wace's works often referred to as Wace's poems, are the only accurate history of those times.

Early Origins of the Petrik family

The surname Petrik was first found in Norfolk and Suffolk where King William granted a barony of fifteen fees shortly after the Norman Conquest to the aforementioned William Patrick. "William, his son, witnessed a charter of William I., to Savigny Abbey." [1]

Within one hundred years of the Conquest, branches of the family were found in northern England including the mention of Paganus de la Lande who held three fees in 1165 from the see of York.

Early History of the Petrik family

Anglo-Norman names tend to be marked by an enormous number of spelling variations. This is largely due to the fact that Old and Middle English lacked any spelling rules when Norman French was introduced in the 11th century. The languages of the English courts at that time were French and Latin. These various languages mixed quite freely in the evolving social milieu. The final element of this mix is that medieval scribes spelled words according to their sounds rather than any definite rules, so a name was often spelled in as many different ways as the number of documents it appeared in. The name was spelled Patrick, Patryck, Partick and others.

Outstanding amongst the family at this time was Simon Patrich (d. 1613), English translator, matriculated as a pensioner at Peterhouse, Cambridge and was a member at Elizabeth's visitation in August 1564; and his grandson, Simon Patrick (1626-1707), was an English theologian and bishop...
Another 42 words (3 lines of text) are included under the topic Early Petrik Notables in all our PDF Extended History products and printed products wherever possible.

Migration of the Petrik family to Ireland

Some of the Petrik family moved to Ireland, but this topic is not covered in this excerpt. More information about their life in Ireland is included in all our PDF Extended History products and printed products wherever possible.

Migration of the Petrik family

Because of the political and religious discontent in England, families began to migrate abroad in enormous numbers. Faced with persecution and starvation at home, the open frontiers and generally less oppressive social environment of the New World seemed tantalizing indeed to many English people. The trip was difficult, and not all made it unscathed, but many of those who did get to Canada and the United States made important contributions to the young nations in which they settled. Some of the first North American settlers with Petrik name or one of its variants: Henry Patrick who settled in Virginia in 1638; Leo Patrick settled in Virginia in 1646; Daniel Patrick and his wife settled in Salem Massachusetts in 1630.