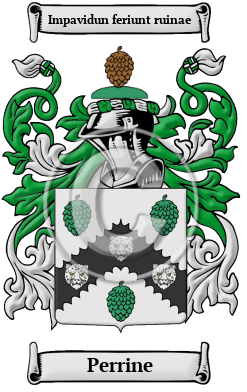 Perrine is a name that came to England in the 11th century wave of migration that was set off by the Norman Conquest of 1066. Perrine comes from the ancient given name Peter which anciently meant rock or stone. "The Counts du Perrin held large possessions in the district of Nosiere, in France, but being Huguenots, the family were compelled to quit their native land, in the earlier part of the XVIII. century, and they settled in Lisburn, in Ireland. Several members of the family have distinguished themselves at the Irish bar, and one is well known as the author of an excellent grammar of his ancestral language. " [1]

Early Origins of the Perrine family

Further to the south in Cornwall, the parish of Perran-Zabuloe is of interest to us. "St. Piran, the supposed patron of the tinners, the performer of miracles, the solitary hermit, and the Bishop of Cornwall took up his abode. 'Piran,' according to Leland, 'was born in Ireland within the province of Ostrige. Domuel was his father, and Wingela his mother. Piran was the disciple of St. Patrick. Piran came into Britain, died and was buried in Britain; and Wingela the mother of Piran inhabited in a place near her son with holy virgins.' At a period subsequent to the Norman Conquest, this manor is said to have belonged to a family called St. Piran, but whether related to the ancient saint is very uncertain." [3]

Early History of the Perrine family

This web page shows only a small excerpt of our Perrine research. Another 76 words (5 lines of text) covering the years 1558, 1553, 1642, 1719 and 1665 are included under the topic Early Perrine History in all our PDF Extended History products and printed products wherever possible.

Before the last few hundred years the English language had no fixed system of spelling rules. For that reason, spelling variations occurred commonly in Anglo Norman surnames. Over the years, many variations of the name Perrine were recorded, including Perrin, Perren, Perrine, Peren, Perring, Perrins and others.

Outstanding amongst the family at this time was William Peryn (died 1558), Dominican, who was probably connected with the Perins of Shropshire, prior of the Dominican house of St. Bartholomew in Smithfield...
Another 32 words (2 lines of text) are included under the topic Early Perrine Notables in all our PDF Extended History products and printed products wherever possible.

In the United States, the name Perrine is the 6,843rd most popular surname with an estimated 4,974 people with that name. [4]

Perrine migration to the United States +

The unstable environment in England at this time caused numerous families to board ships and leave in search of opportunity and freedom from persecution abroad in places like Ireland, Australia, and particularly the New World. The voyage was extremely difficult, however, and only taken at great expense. The cramped conditions and unsanitary nature of the vessels caused many to arrive diseased and starving, not to mention destitute from the enormous cost. Still opportunity in the emerging nations of Canada and the United States was far greater than at home and many went on to make important contributions to the cultures of their adopted countries. An examination of many early immigration records reveals that people bearing the name Perrine arrived in North America very early:

Perrine Settlers in United States in the 17th Century

Perrine Settlers in United States in the 18th Century

Perrine Settlers in Canada in the 18th Century