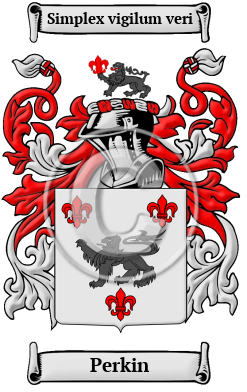 The earliest origins of the name Perkin date back to the time of the Anglo-Saxons. The name is derived from the baptismal name Peter. Baptismal names began to appear as surnames relatively late in the growth of the naming tradition. This is a little surprising, given the popularity of biblical figures in the Christian countries of Europe. Nevertheless, surnames derived from baptismal names grew in popularity during the Middle Ages, and have become one of the foremost sources for surnames. In this case the surname Perkin was originally derived from two elements; per a form of Peter and the suffix kin. The literal meaning of the surname is Little Peter, which denotes the son of Peter. [1]

Early Origins of the Perkin family

The surname Perkin was first found in Leicestershire. The name is traditionally "confined mostly to the southern half of England, being most numerous in Warwickshire, Worcestershire, and South Wales. " [2]

Early History of the Perkin family

Until quite recently, the English language has lacked a definite system of spelling rules. Consequently, Anglo-Saxon surnames are characterized by a multitude of spelling variations. Changes in Anglo-Saxon names were influenced by the evolution of the English language, as it incorporated elements of French, Latin, and other languages. Although Medieval scribes and church officials recorded names as they sounded, so it is common to find one person referred to by several different spellings of his surname, even the most literate people varied the spelling of their own names. Variations of the name Perkin include Perkins, Perkin, Perkyns, Perkens, Perkynn and others.

Distinguished members of the family include John Perkins or Parkins (died 1545), an English jurist; he may have been the John Perkins who was a groom of the royal chamber in 1516. William Perkins (1558-1602) was English Puritan theologian and Sir Christopher Perkins or Parkins (1547-1622) was an English diplomatist, master of requests and dean of Carlisle. Another Christopher Perkins was elected scholar at Winchester...
Another 64 words (5 lines of text) are included under the topic Early Perkin Notables in all our PDF Extended History products and printed products wherever possible.

Perkin migration to the United States +

Searching for a better life, many English families migrated to British colonies. Unfortunately, the majority of them traveled under extremely harsh conditions: overcrowding on the ships caused the majority of the immigrants to arrive diseased, famished, and destitute from the long journey across the ocean. For those families that arrived safely, modest prosperity was attainable, and many went on to make invaluable contributions to the development of the cultures of the new colonies. Research into the origins of individual families in North America revealed records of the immigration of a number of people bearing the name Perkin or a variant listed above:

Perkin Settlers in United States in the 17th Century

Perkin Settlers in United States in the 19th Century

Perkin Settlers in United States in the 20th Century

Perkin Settlers in Australia in the 19th Century

Historic Events for the Perkin family +