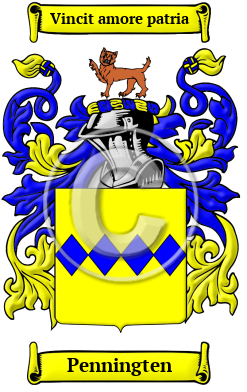 Penningten is a name of ancient Anglo-Saxon origin and comes from the family once having lived in Lancashire at Pennington. Interestingly, two sources claim the name literally means "farmstead paying a penny rent." [1] [2]

Early Origins of the Penningten family

The surname Penningten was first found in Lancashire at Pennington, a parish, in the union of Ulverston, hundred of Lonsdale north of the Sands. "This place, which in Domesday Book is styled 'Pennigetun,' belonged to a local family, one of whom, Gamel de Pennington, was a very considerable person at the time of the Conquest. [3] From him descended Sir John Pennington, who commanded the left wing of the army in an expedition into Scotland under the Earl of Northumberland," [4]

Early History of the Penningten family

Sound was what guided spelling in the essentially pre-literate Middle Ages, so one person's name was often recorded under several variations during a single lifetime. Also, before the advent of the printing press and the first dictionaries, the English language was not standardized. Therefore, spelling variations were common, even among the names of the most literate people. Known variations of the Penningten family name include Pennington, Penington and others.

Notables of the family at this time include William Penington, High Sheriff of Cumberland in 1552, 1558 and 1565; Joseph Pennington of Muncaster Castle, High Sheriff of Cumberland in 1599; and Sir William Pennington (1655-1730), 1st Baronet. Sir Isaac Penington (1584-1661), was an English politician who sat in the House of Commons from 1640 to 1653, Lord Mayor of London in 1642 and a prominent member of Oliver Cromwell's government...
Another 68 words (5 lines of text) are included under the topic Early Penningten Notables in all our PDF Extended History products and printed products wherever possible.

Migration of the Penningten family

For political, religious, and economic reasons, thousands of English families boarded ships for Ireland, Canada, the America colonies, and many of smaller tropical colonies in the hope of finding better lives abroad. Although the passage on the cramped, dank ships caused many to arrive in the New World diseased and starving, those families that survived the trip often went on to make valuable contributions to those new societies to which they arrived. Early immigrants bearing the Penningten surname or a spelling variation of the name include: John Penington, who settled at St. Christopher in 1633; Charles Penington, who arrived in Virginia in 1695; William Penington, who arrived in Virginia in 1652.