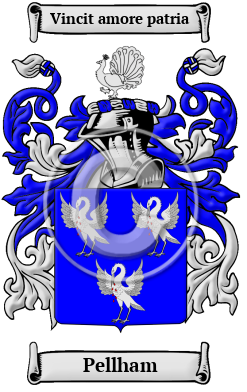 The ancestors of the bearers of the Pellham family name are thought have lived in ancient Anglo-Saxon England. They were first found in the region of Pelham. Pellham is a topographic surname, which was given to a person who resided near a physical feature such as a hill, stream, church, or type of tree. Habitation names form the other broad category of surnames that were derived from place-names. They were derived from pre-existing names for towns, villages, parishes, or farmsteads. Other local names are derived from the names of houses, manors, estates, regions, and entire counties.

Early Origins of the Pellham family

The surname Pellham was first found in Hertfordshire at either Brent Pelham, Furneux Pelham or Stocking Pelham. Today they form the civil parish of Brent Pelham and Meesden. They date back to the Domesday Book of 1086 where they were listed as Peleham. [1]

Early History of the Pellham family

Until quite recently, the English language has lacked a definite system of spelling rules. Consequently, Anglo-Saxon surnames are characterized by a multitude of spelling variations. Changes in Anglo-Saxon names were influenced by the evolution of the English language, as it incorporated elements of French, Latin, and other languages. Although Medieval scribes and church officials recorded names as they sounded, so it is common to find one person referred to by several different spellings of his surname, even the most literate people varied the spelling of their own names. Variations of the name Pellham include Pelham, Pellam and others.

Notables of the family at this time include John de Pelham (died 1429), Treasurer of England, son of Sir John Pelham, a Sussex knight who fought in the wars of Edward III in France; Sir Thomas Pelham, 1st Baronet (c.1540-1624), Member of Parliament for Lewes, Surrey, and Sussex; Sir Thomas Pelham, 2nd Baronet (1597-c.1654), Member of Parliament for East Grinstead and Sussex; Sir Peregrine Pelham (died 1650), an English Member of Parliament and one of the regicides of King Charles I, 20th of the 59 signatories on the death warrant of the King; Thomas Pelham, 1st Baron Pelham (1653-1712) and his...
Another 103 words (7 lines of text) are included under the topic Early Pellham Notables in all our PDF Extended History products and printed products wherever possible.

In the United States, the name Pellham is the 16,784th most popular surname with an estimated 2,487 people with that name. [5]

Migration of the Pellham family to Ireland

Some of the Pellham family moved to Ireland, but this topic is not covered in this excerpt.
Another 147 words (10 lines of text) about their life in Ireland is included in all our PDF Extended History products and printed products wherever possible.

Migration of the Pellham family

Searching for a better life, many English families migrated to British colonies. Unfortunately, the majority of them traveled under extremely harsh conditions: overcrowding on the ships caused the majority of the immigrants to arrive diseased, famished, and destitute from the long journey across the ocean. For those families that arrived safely, modest prosperity was attainable, and many went on to make invaluable contributions to the development of the cultures of the new colonies. Research into the origins of individual families in North America revealed records of the immigration of a number of people bearing the name Pellham or a variant listed above: William Pelham settled with Penelope in Salem Massachusetts in 1630; along with Herbert; William Pelham and his wife Mary settled in Virginia in 1774..