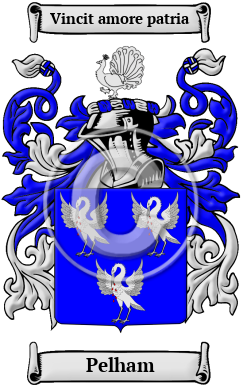 The Anglo-Saxon name Pelham comes from the family having resided in the region of Pelham. Pelham is a topographic surname, which was given to a person who resided near a physical feature such as a hill, stream, church, or type of tree. Habitation names form the other broad category of surnames that were derived from place-names. They were derived from pre-existing names for towns, villages, parishes, or farmsteads. Other local names are derived from the names of houses, manors, estates, regions, and entire counties.

Early Origins of the Pelham family

The surname Pelham was first found in Hertfordshire at either Brent Pelham, Furneux Pelham or Stocking Pelham. Today they form the civil parish of Brent Pelham and Meesden. They date back to the Domesday Book of 1086 where they were listed as Peleham. [1]

Early History of the Pelham family

Pelham has been spelled many different ways. Before English spelling became standardized over the last few hundred years, spelling variations in names were a common occurrence. As the English language changed in the Middle Ages, absorbing pieces of Latin and French, as well as other languages, the spelling of people's names also changed considerably, even over a single lifetime. Spelling variants included: Pelham, Pellam and others.

Notables of the family at this time include John de Pelham (died 1429), Treasurer of England, son of Sir John Pelham, a Sussex knight who fought in the wars of Edward III in France; Sir Thomas Pelham, 1st Baronet (c.1540-1624), Member of Parliament for Lewes, Surrey, and Sussex; Sir Thomas Pelham, 2nd Baronet (1597-c.1654), Member of Parliament for East Grinstead and Sussex; Sir Peregrine Pelham (died 1650), an English Member of Parliament and one of the regicides of King Charles I, 20th of the 59 signatories on the death warrant of the King; Thomas Pelham, 1st Baron Pelham (1653-1712) and his...
Another 103 words (7 lines of text) are included under the topic Early Pelham Notables in all our PDF Extended History products and printed products wherever possible.

In the United States, the name Pelham is the 9,654th most popular surname with an estimated 2,487 people with that name. [5]

Migration of the Pelham family to Ireland

Some of the Pelham family moved to Ireland, but this topic is not covered in this excerpt.
Another 147 words (10 lines of text) about their life in Ireland is included in all our PDF Extended History products and printed products wherever possible.

Pelham migration to the United States +

In an attempt to escape the chaos experienced in England, many English families boarded overcrowded and diseased ships sailing for the shores of North America and other British colonies. Those families hardy enough, and lucky enough, to make the passage intact were rewarded with land and a social environment less prone to religious and political persecution. Many of these families became important contributors to the young colonies in which they settled. Early immigration and passenger lists have documented some of the first Pelhams to arrive on North American shores:

Pelham Settlers in United States in the 17th Century

Pelham Settlers in United States in the 18th Century

Pelham Settlers in Australia in the 19th Century

Pelham Settlers in West Indies in the 17th Century

Historic Events for the Pelham family +