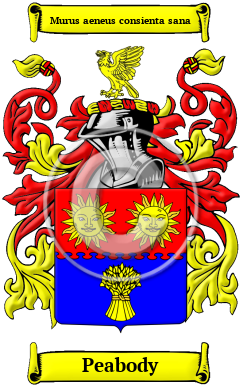 Peabody is a name that was brought to England by the ancestors of the Peabody family when they migrated to the region after the Norman Conquest in 1066. The Peabody family lived in Hertfordshire. The name, however, is a reference to Pabode, Normandy, the family's place of residence prior to the Norman Conquest of England in 1066. It has also been suggested that Peabody began as a nickname which marked a person by some physical characteristic, but, while this does seem probable, no convincing etymological derivation has been discovered to support this idea.

Early Origins of the Peabody family

The surname Peabody was first found in Hertfordshire, but we must take a moment to pass on a rather ridiculous origin of the name that this author agrees is rather 'far-fetched.' "The same as Paybody. Dixon derived it from Pae-body, 'one as handsome as a pae or peacock!' This is far-fetched enough for the ordinary belief, but Mr. Arthur goes much further, in deducing the lineage of the name from one Boadie, a kinsman of Queen Boadices, who escaped into Wales, and there got the name of Pea, or mountain, prefixed to his name !!" [1]

After that distraction, we must seriously explore the origin of the distinguished name. "Pabode held a fief from the see of Durham, temp. William I. He was probably of Flemish origin. Henry Pappede held this fief 1165 and from him descended the family of Pappady, Pabody or Peabody, from which [descend] the celebrated philanthropist of the name." [2]

Early History of the Peabody family

This web page shows only a small excerpt of our Peabody research. Another 86 words (6 lines of text) covering the years 108 and 1086 are included under the topic Early Peabody History in all our PDF Extended History products and printed products wherever possible.

Spelling variations in names were a common occurrence in the eras before English spelling was standardized a few hundred years ago. In the Middle Ages, even the literate regularly changed the spellings of their names as the English language incorporated elements of French, Latin, and other European languages. Many variations of the name Peabody have been found, including Peabody, Paybody and others.

More information is included under the topic Early Peabody Notables in all our PDF Extended History products and printed products wherever possible.

In the United States, the name Peabody is the 5,605th most popular surname with an estimated 4,974 people with that name. [3]

Peabody migration to the United States +

For many English families, the social climate in England was oppressive and lacked opportunity for change. For such families, the shores of Ireland, Australia, and the New World beckoned. They left their homeland at great expense in ships that were overcrowded and full of disease. Many arrived after the long voyage sick, starving, and without a penny. But even those were greeted with greater opportunity than they could have experienced back home. Numerous English settlers who arrived in the United States and Canada at this time went on to make important contributions to the developing cultures of those countries. Many of those families went on to make significant contributions to the rapidly developing colonies in which they settled. Early North American records indicate many people bearing the name Peabody were among those contributors:

Peabody Settlers in United States in the 17th Century

Peabody Settlers in United States in the 19th Century