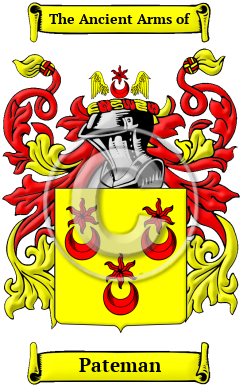 Early Origins of the Pateman family

The surname Pateman was first found in Herefordshire at Shobdon, a parish, in-the union of Leominster, hundred of Stretford. "The living is a rectory, valued in the king's books at £5. 7. 11.; net income, £764; patron, Lord Bateman. The church, which is the burial-place of the Bateman family, was partially rebuilt in 1757, by John, Viscount Bateman. The rent of several acres of land, and the proceeds of some minor benefactions, are distributed among the poor. " [2]

Old Hutton in Westmorland was another family seat. "Bleaze Hall, for several centuries the seat of the Batemans, was a large and elegant mansion, which still retains traces of its former consequence in a fine oak-wainscoted room, dated 1624." [2]

One of the first records of the family was William Bateman (1298?-1355), "Bishop of Norwich, who is also called, from his birthplace, William of Norwich. His father was one of the principal citizens of Norwich, having no less than eleven times filled the office of bailiff of the city (Norwich had no mayor till 1403), of which he sat as the representative in the parliament of 1326-1327." [3]

Early History of the Pateman family

It is only in the last few hundred years that the English language has been standardized. For that reason, early Anglo-Saxon surnames like Pateman are characterized by many spelling variations. As the English language changed and incorporated elements of other European languages, even literate people changed the spelling of their names. The variations of the name Pateman include: Bateman, Batman, Bademan, Badman, Pateman, Padman, Pademan and many more.

Notables of this surname at this time include: William Bateman (c.1298-1355), Bishop of Norwich and founder of Trinity College, Cambridge, who was sent to Avignon, to present the English King's claim to the French throne to the Pope; Robert Bateman (1560-1644), an English merchant and politician, London City Chamberlain (1626-1644); and...
Another 51 words (4 lines of text) are included under the topic Early Pateman Notables in all our PDF Extended History products and printed products wherever possible.

Migration of the Pateman family to Ireland

Some of the Pateman family moved to Ireland, but this topic is not covered in this excerpt.
Another 60 words (4 lines of text) about their life in Ireland is included in all our PDF Extended History products and printed products wherever possible.

Pateman migration to the United States +

Many English families tired of political and religious strife left Britain for the new colonies in North America. Although the trip itself offered no relief - conditions on the ships were extremely cramped, and many travelers arrived diseased, starving, and destitute - these immigrants believed the opportunities that awaited them were worth the risks. Once in the colonies, many of the families did indeed prosper and, in turn, made significant contributions to the culture and economies of the growing colonies. An inquiry into the early roots of North American families has revealed a number of immigrants bearing the name Pateman or a variant listed above:

Pateman Settlers in United States in the 17th Century

Pateman Settlers in United States in the 18th Century

Pateman Settlers in United States in the 19th Century

Pateman Settlers in Australia in the 19th Century

Pateman Settlers in New Zealand in the 19th Century