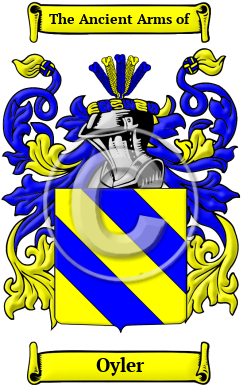 The Oyler surname is generally thought to derive from a place name, perhaps Pont Doylly, or Duilly in Normandy. Alternatively, the Oyler, Ollier and similar spellings could have been derived from the English occupational name for an extractor or seller of oil having derived from the Anglo-Norman French word "olier" from "oile." In northern England linseed oil was commonly derived from flax and used as a substitute for olive oil. [1]

Early Origins of the Oyler family

The surname Oyler was first found in Oxfordshire where they held a family seat as Lords of the Manor. After the Battle of Hastings in 1066, William, Duke of Normandy, having prevailed over King Harold, granted most of Britain to his many victorious Barons. It was not uncommon to find a Baron, or a Bishop, with 60 or more Lordships scattered throughout the country. These he gave to his sons, nephews and other junior lines of his family and they became known as under-tenants. They adopted the Norman system of surnames which identified the under-tenant with his holdings so as to distinguish him from the senior stem of the family. After many rebellious wars between his Barons, Duke William, commissioned a census of all England to determine in 1086, settling once and for all, who held which land. He called the census the Domesday Book, [2] indicating that those holders registered would hold the land until the end of time. Hence, conjecturally, the surname is descended from the tenant of the lands of Eynsham held by Columban, a Norman noble as under tenant of the Bishop of Lincoln who was recorded in the Domesday Book census of 1086. His overlord was Robert d'Ouilli.

Early History of the Oyler family

Outstanding amongst the family at this time was Thomas D'Oyley (fl. 1585), English antiquary, the second son of Sir Henry D'Oyly, knight, of Pondhall in the parish of Hadleigh, Suffolk; Robert D'Oyley (1542-1577) of Hambleden, Buckinghamshire, who was Sheriff of Oxfordshire in 1573; and Sir Cope Doyley (d. 1633), who inherited Hambleden Manor, Buckinghamshire in...
Another 54 words (4 lines of text) are included under the topic Early Oyler Notables in all our PDF Extended History products and printed products wherever possible.

In the United States, the name Oyler is the 7,256th most popular surname with an estimated 4,974 people with that name. [3]

Oyler migration to the United States +

Oyler Settlers in United States in the 19th Century

Oyler Settlers in United States in the 20th Century