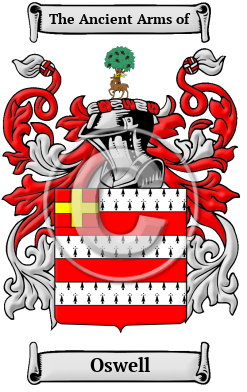 The Oswell surname in Ireland generally derives from the name of a Norman family, originally from the area of Houssaye in the Seine-Maritime region of Normandy. The name was sometimes converted into Gaelic as Ó hEodhusa, and from that, was re-Anglicized, occasionally into Oswell.

Early Origins of the Oswell family

The surname Oswell was first found in County Meath (Irish: An Mhí) anciently part of the kingdom of Brega, located in Eastern Ireland, in the province of Leinster where bearers of the name acquire extensive lands near Dublin from Hugo de Lacy. The name had first come from Normandy to England, where a family held a family seat at Kent where they were granted lands by Duke William of Normandy.

Early History of the Oswell family

This web page shows only a small excerpt of our Oswell research. Another 73 words (5 lines of text) covering the years 1294, 1550, 1569, 1612, and 1614 are included under the topic Early Oswell History in all our PDF Extended History products and printed products wherever possible.

Spelling variations of this family name include: O'Hosey, Ohosey, Hussey, Hosey, Oswell and others.

Another 49 words (4 lines of text) are included under the topic Early Oswell Notables in all our PDF Extended History products and printed products wherever possible.

Migration of the Oswell family to Ireland

Some of the Oswell family moved to Ireland, but this topic is not covered in this excerpt. More information about their life in Ireland is included in all our PDF Extended History products and printed products wherever possible.

Oswell migration to the United States +

Oswell Settlers in United States in the 18th Century

Oswell Settlers in United States in the 19th Century

Oswell Settlers in Australia in the 19th Century