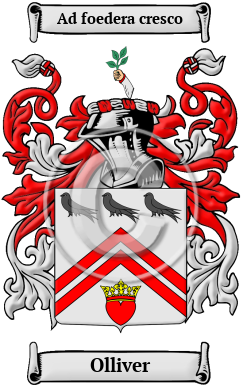 The surname Olliver was first used in the Scottish/English Borderlands by an ancient Scottish people called the Strathclyde- Britons. It was a name for someone who lived in Roxburgh. While most of the name likely derive from the Old French Oivier, it is supposed that some of the Scottish instances of this name derive from the Old Norse name Oleifr.

Early Origins of the Olliver family

The surname Olliver was first found in Roxburghshire, where the first on record in this shire was Walter Olifer who was a Justiciar (Judge) of the district, who witnessed a gift of William the Lion to the serf Gillemachoi de Conglud with his children and all his descendants to the bishop of Glasgow c. 1180. Olyver, son of Kyluert, was one of the followers of the earl of March at end of twelfth century. [1]

Despite the fact that the lion's hare of the family do originate in Scotland and into the English borders, there are significant early English records. "Its principal homes are as follows: in the north, in Northumberland and Durham, whence it extends into the Scottish border counties; in the west, in Herefordshire; in the east, in Lincolnshire; in the south - west (including the contracted form of Olver), in Cornwall; and in the south - east, in Kent and Sussex. " [2]

And we would be remiss if we did not mention the earliest entry of the family in the Domesday Book of 1086 as a personal name. Later, the Hundredorum Rolls of 1273 list the name as both a personal name and a surname: Oliver Crane in Huntingdonshire, 1273; and Peter filius Oliver in Oxfordshire. [3]

Early History of the Olliver family

The many spelling variations in Medieval Scottish names result from the fact that scribes in that era spelled words according to sound. Translation too, was an undeveloped science, and many names were altered into complete obscurity. Over the years Olliver has been spelled Oliver, Olivier, Ollivier, Olliver and others.

Notable amongst the family at this time was John Oliuer, prepositus of Berwick, who witnessed a gift of land to the Hospital of Soltre, c. 1250-1266; William Holifarth or Holyfarth held land in Perth, c. 1330; Thomas Olyver de Swyne who witnessed a declaration dated...
Another 45 words (3 lines of text) are included under the topic Early Olliver Notables in all our PDF Extended History products and printed products wherever possible.

Migration of the Olliver family to Ireland

Some of the Olliver family moved to Ireland, but this topic is not covered in this excerpt.
Another 90 words (6 lines of text) about their life in Ireland is included in all our PDF Extended History products and printed products wherever possible.

Olliver migration to the United States +

Olliver Settlers in United States in the 17th Century

Olliver Settlers in United States in the 19th Century

Olliver Settlers in Canada in the 18th Century

Olliver Settlers in West Indies in the 17th Century

Historic Events for the Olliver family +