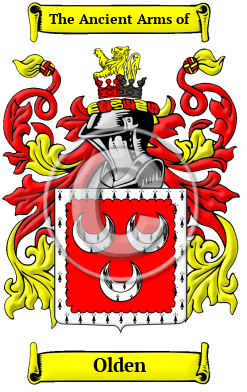 Early Origins of the Olden family

The surname Olden was first found in Westmorland where they held a family seat as Lords of the Manor. The Saxon influence of English history diminished after the Battle of Hastings in 1066. The language of the courts was French for the next three centuries and the Norman ambience prevailed. But Saxon surnames survived and the family name was first referenced in the 11th century when Aldenus held estates in that county. They may have been of Cumbrian extraction. The Dalden variant has a most interesting history found in Dawdon or Dawden, Durham. "There was once a castle or peel here, which in the first ages after the Conquest was the seat of the family of Escolland, who, it seems, afterwards assumed the name of Dalden, by which term this place was formerly designated, It was also for two centuries a favourite seat of the family of Bowes. A domestic chapel was attached to the structure, as Sir Jordan de Dalden, in 1325, obtained a licence to establish an oratory within his manor-house, on condition that no injury should arise to the parochial church of Dalton." [1]

Early History of the Olden family

It is only in the last few hundred years that the English language has been standardized. For that reason, early Anglo-Saxon surnames like Olden are characterized by many spelling variations. As the English language changed and incorporated elements of other European languages, even literate people changed the spelling of their names. The variations of the name Olden include: Alden, Aldin, Aldwen, Aldyn, Aldwyn, Aldwen, Elden, Eldwyn, Eldwin, Eldin, Olden, Auden, Aldan, Aldon and many more.

Distinguished members of the family include John, C. Alden (1599-1687) was a crew member of the Mayflower and one of the Puritan settlers of the Plymouth Colony. He arrived in America where he became an assistant to the Governor of the colony. He married Priscilla Alden (c. 1602-1680) (née Mullins or Mullens), on May 12, 1622. She was another passenger on...
Another 60 words (4 lines of text) are included under the topic Early Olden Notables in all our PDF Extended History products and printed products wherever possible.

In the United States, the name Olden is the 14,522nd most popular surname with an estimated 2,487 people with that name. [2]

Olden migration to the United States +

Many English families tired of political and religious strife left Britain for the new colonies in North America. Although the trip itself offered no relief - conditions on the ships were extremely cramped, and many travelers arrived diseased, starving, and destitute - these immigrants believed the opportunities that awaited them were worth the risks. Once in the colonies, many of the families did indeed prosper and, in turn, made significant contributions to the culture and economies of the growing colonies. An inquiry into the early roots of North American families has revealed a number of immigrants bearing the name Olden or a variant listed above:

Olden Settlers in United States in the 18th Century

Olden Settlers in United States in the 19th Century

Olden Settlers in Australia in the 19th Century