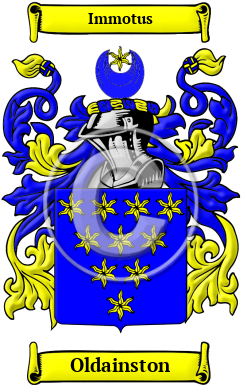 The ancestors of the Oldainston family lived among the Strathclyde-Briton people of the Scottish/English Borderlands. Oldainston is a name for someone who lived in Cumberland. Alternatively, the name could have been from the Old Norse, Hallstein; from the Flemish, Alsteens and appeared in the Domesday Book of 1086 as Alstan, Alestan; a personal name. [1]

Early Origins of the Oldainston family

The surname Oldainston was first found in Cumberland, where they held the manor of Aldanstone. One of the first records of the name was "Jurdan de Aldanston [who] was juror on an inquisition held at Berwick on the lands of Lady Elena de la Zuche lying in the sheriffdom of Edinburgh, 1296." [3]

Early History of the Oldainston family

This web page shows only a small excerpt of our Oldainston research. Another 158 words (11 lines of text) covering the years 1667, 1684, 1687, 1681, 1905 and 1683 are included under the topic Early Oldainston History in all our PDF Extended History products and printed products wherever possible.

Spelling and translation were hardly exact sciences in Medieval Scotland. Sound, rather than any set of rules, was the basis for spellings, so one name was often spelled different ways even within a single document. Spelling variations are thus an extremely common occurrence in Medieval Scottish names. Oldainston has been spelled Aldanston, Alston, Auldston, Alstounes, Alstone, Alstowne, Aldenston and many more.

Notable amongst the family at this time was Charles Alston (1683-160), a Scottish scientific writer, born at Eddlewood, and educated at Glasgow. "On his father's death...
Another 26 words (2 lines of text) are included under the topic Early Oldainston Notables in all our PDF Extended History products and printed products wherever possible.

Migration of the Oldainston family to Ireland

Some of the Oldainston family moved to Ireland, but this topic is not covered in this excerpt. More information about their life in Ireland is included in all our PDF Extended History products and printed products wherever possible.

Migration of the Oldainston family

Such hard times forced many to leave their homeland in search of opportunity across the Atlantic. Many of these families settled along the east coast of North America in communities that would become the backbones of the young nations of the United States and Canada. The ancestors of many of these families have rediscovered their roots in the 20th century through the establishment of Clan societies and other patriotic Scottish organizations. Among them: Samuel and William Alston settled in Charles Town [Charleston], South Carolina in 1767; John Alston settled in Barbados in 1685; Rose Alston settled in New England in 1661. In Newfoundland, John Alston an immigrant from Liverpool, was married in St. John's in 1858..