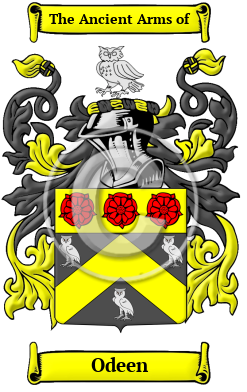 The Anglo-Saxon name Odeen comes from when the family resided in Oldham, in Lancashire. This was a town near the city of Manchester; it has since been absorbed by that city. The place-name Oldham is derived from the Old English elements old, which means old, and ham, which means farm. The place-name therefore translates as "the old farm." Alternatively, Oldham could have meant "dweller by the long-cultivate river flat." [1]

Early Origins of the Odeen family

The surname Odeen was first found in Lancashire at Oldham, an enfranchised borough, a parochial chapelry, and the head of a union, in the parish of Prestwich, hundred of Salford. Now part of Greater Manchester, the first record of the placename was found in 1226-1228 when it was listed as Aldholm. [2] "Oldham was for a long period celebrated for the manufacture of hats, which was established so early as the fifteenth century." [3]

Another possible origin of the name was found. "This place [(Werneth, Lancashire) which adjoins to the town of Oldham], anciently Fernet, was held in the reign of Henry III. by Alwardus de Aldholme, founder of the family of Oldham. His daughter and co-heiress conveyed the manor to the Cudworths, a branch of a Yorkshire family; and from them the estate passed by sale to Sir Ralph Assheton, of Middleton." [3]

We can only assume that both sources are referring to that same family at different times. Early rolls list the first record of the name not in Lancashire but as Achard de Aldeham in the Feet of Fines for Kent. Richard de Oldham was listed in Lancashire in 1384. [1] The Yorkshire Poll Tax Rolls of 1379 listed Agnes de Oldom and Robertus de Oldom. [4]

Further to the north, Hoddam is parish in the county of Dumfries, Scotland. "This parish comprehends the ancient parishes of Hoddam, Luce, and Ecclesfechan, which were united in 1609. Hoddam, in ancient charters, is spelt Hodholm and Hodolm, signifying 'the head of the holm,' and is supposed to have derived that appellation from its situation on the bank of the river Annan, where the ground is flat and rich, and what is usually called holm land." [5]

Early History of the Odeen family

Before English spelling was standardized a few hundred years ago, spelling variations of names were a common occurrence. Elements of Latin, French and other languages became incorporated into English through the Middle Ages, and name spellings changed even among the literate. The variations of the surname Odeen include Oldham, Oldum, Oldan, Oldhams and others.

Another 44 words (3 lines of text) are included under the topic Early Odeen Notables in all our PDF Extended History products and printed products wherever possible.

Migration of the Odeen family

A great wave of immigration to the New World was the result of the enormous political and religious disarray that struck England at that time. Families left for the New World in extremely large numbers. The long journey was the end of many immigrants and many more arrived sick and starving. Still, those who made it were rewarded with an opportunity far greater than they had known at home in England. These emigrant families went on to make significant contributions to these emerging colonies in which they settled. Some of the first North American settlers carried this name or one of its variants: John Oldham (c.1600-1636) who emigrated to Plymouth in 1623, was involved in establishing the unsuccessful settlement on Cape Ann (1626), and was murdered by the Pequot in an event leading to the Pequot War (1637). Thomas Oldham settled in New England in 1635.