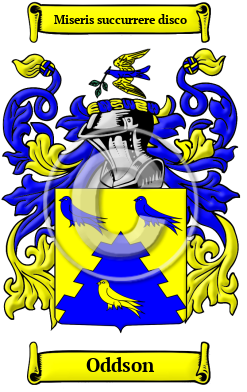 The name Oddson is from the ancient Anglo-Saxon culture of the Britain and comes from the baptismal name for Roger,which was originally derived from the nickname Hodge. As the naming tradition grew in Europe baptismal names began to be introduced in many countries. Baptismal names were sometimes given in honor of Christian saints and other biblical figures. There are very few Christian countries in Europe that did not adopt surnames from these religious figures.

Early Origins of the Oddson family

The surname Oddson was first found in Northumberland where "this name in the North of England is pronounced Hodgin, while in the South it has taken not only the pronunciation, but the spelling, of Hodson or Hudson. The name of Hodgson is ancient at Newcastle-upon-Tyne, being found in records of temp. Edward I., and the Hodgsons of Stella and Acton, co. Northumberland, trace a clear pedigree to 1424." [1]

Early History of the Oddson family

The first dictionaries that appeared in the last few hundred years did much to standardize the English language. Before that time, spelling variations in names were a common occurrence. The language was changing, incorporating pieces of other languages, and the spelling of names changed with it. Oddson has been spelled many different ways, including Hodgson, Hodson, Hodsdon and others.

Notables of this surname at this time include: James Hodgson, of Cark who was listed in the Lancashire Wills at Richmond in 1591. The same source lists John Hodgeshon of Caton in 1616; and Cuthbert Hodgshon in 1611. [3] James Hodgson (1672-1755), was an English mathematical teacher and writer. In 1703 he was elected fellow, and in 1733 one of the council, of the Royal Society. [4] John Hodgson (d. 1684), was an English autobiographer, a Yorkshire gentleman, who resided near Halifax, took up arms on the side of the...
Another 88 words (6 lines of text) are included under the topic Early Oddson Notables in all our PDF Extended History products and printed products wherever possible.

Migration of the Oddson family to Ireland

Some of the Oddson family moved to Ireland, but this topic is not covered in this excerpt. More information about their life in Ireland is included in all our PDF Extended History products and printed products wherever possible.

Migration of the Oddson family

Thousands of English families in this era began to emigrate the New World in search of land and freedom from religious and political persecution. Although the passage was expensive and the ships were dark, crowded, and unsafe, those who made the voyage safely were rewarded with opportunities unavailable to them in their homeland. Research into passenger and immigration lists has revealed some of the very first Oddsons to arrive in North America: William Hodgson who settled in Jamaica in 1651; William Hodgson settled in Barbados in 1634; Thomas Hodgson and his wife and child settled in Philadelphia in 1774.