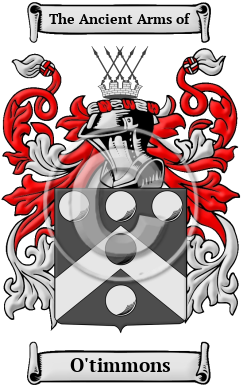 Early Origins of the O'timmons family

The surname O'timmons was first found in counties Wicklow and Carlow (Irish: Cheatharlach) a small landlocked area located in the province of Leinster in the South East of Ireland, from 1172. Timon of Athens ( fl. 431 BC) was a citizen of Athens whose misanthropy grew to legendary status. He was the inspiration for Shakespeare's Timon of Athens (The Life of Tymon of Athens), one of his first tragedies.

Early History of the O'timmons family

This web page shows only a small excerpt of our O'timmons research. Another 66 words (5 lines of text) covering the years 117 and 1172 are included under the topic Early O'timmons History in all our PDF Extended History products and printed products wherever possible.

Church officials and medieval scribes often simply spelled names as they sounded. As a result, a single person's name may have been recorded a dozen different ways during his lifetime. Spelling variations for the name O'timmons include: Timmons, Timmins, O'Timmon, O'Timmons, Tymon, McToimin and many more.

More information is included under the topic Early O'timmons Notables in all our PDF Extended History products and printed products wherever possible.

Migration of the O'timmons family

The Irish emigration during the late 18th and 19th century contributed to the melting pot of nationalities in North America, and the building of a whole new era of industry and commerce in what was seen as a rich, new land. Ireland's Great Potato Famine resulted in the worst economic and social conditions in the island's history. And in response to the hunger, disease, and poverty, during this decade the total number of emigrants to leave for North America rivaled all the previous years combined. Those from this decade that arrived on North American shores were not warmly welcomed by the established population, but they were vital to the rapid development of the industry, agriculture, and infrastructure of the infant nations of the United States and what would become Canada. Research into early immigration and passenger lists has shown many people bearing the name O'timmons: Margaret Timmins from St. Mullins in Carlow who settled in St. John's, Newfoundland, in 1819; Lawrence Timmons settled in Harbour Grace, Newfoundland, in 1822.