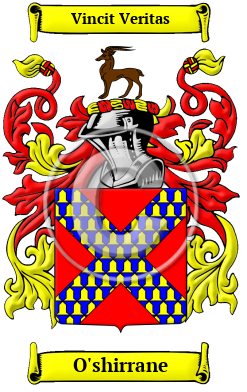 The surname O'shirrane is derived from Mac Searthuin, which means son of Searthun. The personal name Searthun is equivalent to Geoffrey.

Early Origins of the O'shirrane family

The surname O'shirrane was first found in County Donegal (Irish: Dún na nGall), northwest Ireland in the province of Ulster, sometimes referred to as County Tyrconnel, where they held a family seat, some say before the Anglo Norman invasion of Ireland by Strongbow in 1172. However, others claim that it is an offshoot of the Prendergast Clan in County Mayo, where they adopted the Gaelic name of O'Sirin, and established themselves on the Donegal/ Fermanagh border about the year 1250.

Early History of the O'shirrane family

This web page shows only a small excerpt of our O'shirrane research. Another 92 words (7 lines of text) covering the years 1659 and 1673 are included under the topic Early O'shirrane History in all our PDF Extended History products and printed products wherever possible.

Names were simply spelled as they sounded by medieval scribes and church officials. Therefore, during the lifetime of a single person, his name was often spelt in many different ways, explaining the many spelling variations encountered while researching the name O'shirrane. Some of these variations included: Shearing, Sheering, Sheeran, Sharron, Sherren, Sherran, Shirran, Sheeran, Sheerin, O'Shearing, O'Sheering, O'Sheeran, O'Sharron, O'Sherren, O'Sherran, O'Shirran, O'Sheeran, O'Shearing and many more.

More information is included under the topic Early O'shirrane Notables in all our PDF Extended History products and printed products wherever possible.

Migration of the O'shirrane family

Irish immigration to North American began in the late 18th century as many Irish families desired to own their own land. This pattern of immigration grew slowly yet steadily until the 1840s. At that time, a failed crop and a growing population in Ireland resulted in the Great Potato Famine. Poverty, disease, and starvation ravaged the land. To ease their pain and suffering the Irish often looked upon North America as a solution: hundreds of thousands undertook the voyage. Their arrival meant the growth of industry and commerce for British North America and the United States. For the individual Irishman, it meant survival and hope, and the opportunity for work, freedom, and ownership of land. The early immigration and passenger lists revealed many bearing the name O'shirrane: Daniel, Edward, Hugh, Patrick and Thomas Sheerin who landed in Philadelphia, Pennsylvania between 1804 and 1864; Edward and John Sheering landed in Philadelphia in 1867.