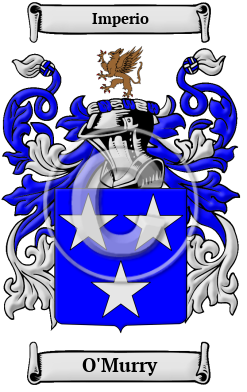 The O'Murry surname in Ireland is an Anglicization of two different Gaelic names: O Muireadhaigh, and Mac Muireadhaigh.

Early Origins of the O'Murry family

The surname O'Murry was first found in County Roscommon (Irish: Ros Comáin) located in central Ireland in the province of Connacht, where they held a family seat from ancient times.

Early History of the O'Murry family

This web page shows only a small excerpt of our O'Murry research. Another 130 words (9 lines of text) covering the years 1450, 1458, 1484, and 1771 are included under the topic Early O'Murry History in all our PDF Extended History products and printed products wherever possible.

Spelling variations of this family name include: O'Murry, Murray and others.

More information is included under the topic Early O'Murry Notables in all our PDF Extended History products and printed products wherever possible.

Migration of the O'Murry family

Some of the first settlers of this family name or some of its variants were: John McMurray, one of the Scotch-Irish, who settled in Charles Town [Charleston], South Carolina in 1772; Alex McMurray, who came to New York city in 1811.