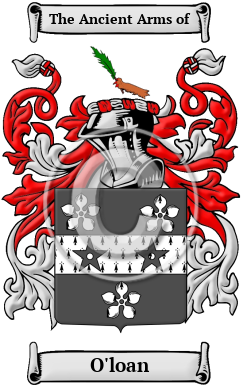 The surname O'loan is an Anglicization of O Luain. Lambe is a very popular variant of Loane, especially among the scattered O Luain sept of Limerick. The name Lambe also came to Ireland through Cromwellian and other settlers from England.

Early Origins of the O'loan family

The surname O'loan was first found in County Limerick, and in the ancient territory of Oriel, the two places in which two separate septs of the same name existed. The chiefs of the O Luain sept of Limerick were lords of Deisbeg, but were dispersed throughout Munster after the Anglo- Norman invasion. The O Luain sept of Oriel in the north were scattered as well.

Early History of the O'loan family

This web page shows only a small excerpt of our O'loan research. Another 20 words (1 lines of text) covering the years 1852 and 1853 are included under the topic Early O'loan History in all our PDF Extended History products and printed products wherever possible.

Notable among the family name at this time was Lieutenant George H. Lamb, who left a diary of his exploits during his service with the army in Ireland...
Another 27 words (2 lines of text) are included under the topic Early O'loan Notables in all our PDF Extended History products and printed products wherever possible.

O'loan migration to the United States +

O'loan Settlers in United States in the 19th Century