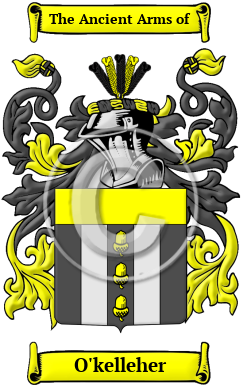 Irish surnames are linked to the long Gaelic heritage of the Island nation. The original Gaelic form of the name O'kelleher is "O Ceileachair," which means "companion dear." [1] Another source claims the name means "wise, prudent." [2]

Early Origins of the O'kelleher family

The surname O'kelleher was first found in County Clare (Irish: An Clár) located on the west coast of Ireland in the province of Munster, where they held a family seat from very ancient times. They "derive their sirname from Ceileachar, son of Donchuan, brother of Brian Borimhe [Boru], the 175th Monarch of Ireland. In the twelfth and even so late as the sixteenth century, the O'Kellehers were possessed of lands in Munster; but the pedigree of the family is, we fear, lost." [2] The oldest record of the family was of Donogh O'Kelleher, successor of St. Kieren of Siager (Bishop of Ossory) who died in 1048. MacLysaght noted that the family left their original habitat in County Clare in the 14th century and moved to County Cork. [3]

Early History of the O'kelleher family

This web page shows only a small excerpt of our O'kelleher research. Another 87 words (6 lines of text) covering the years 101 and 1014 are included under the topic Early O'kelleher History in all our PDF Extended History products and printed products wherever possible.

The recording of names in Ireland in the Middle Ages was an inconsistent endeavor at best. One must realize that attempting to record a Gaelic name in English is a daunting task at the best of times. Even today the translation is a difficult one. Accordingly, research into the name O'kelleher revealed spelling variations, including Kelleher, O'Kelleher, Kellehar, Kellegher and others.

More information is included under the topic Early O'kelleher Notables in all our PDF Extended History products and printed products wherever possible.

Migration of the O'kelleher family

Irish families fled the English-colonized Ireland in record numbers during the 19th century for North America. Many of those destitute families died from disease during, and even shortly after, the long journey. Although those that immigrated before the Great Potato Famine of the 1840s often were granted a tract of land, those that arrived later were generally accommodated in urban centers or in work camps. Those in the urban centers would labor in the manufacturing sector, whereas those in work camps would to build critical infrastructures such as bridges, canals, roads, and railways. Regardless of when these Irish immigrants came to North America, they were critical for the rapid development of the young nations of the United States and Canada. Early immigration and passenger lists have recorded many early immigrants bearing the name of O'kelleher: Patrick Kellegher, who settled in Boston Massachusetts in 1850; Cornelius, John and Patrick Kellehar settled in Philadelphia, Pennsylvania between 1855 and 1878.