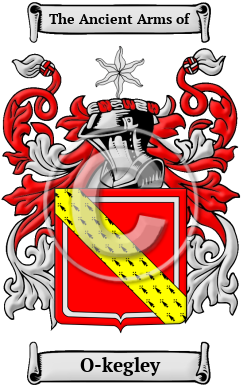 The Irish surnames in use today are underpinned by a multitude of rich histories. The name O-kegley originally appeared in Gaelic as O Coigligh, which may be derived from "coigeal," which denotes "unkempt hair."

Early Origins of the O-kegley family

The surname O-kegley was first found in County Mayo (Irish: Maigh Eo) located on the West coast of the Republic of Ireland in the province of Connacht, where they held a family seat from very ancient times.

Early History of the O-kegley family

This web page shows only a small excerpt of our O-kegley research. Another 162 words (12 lines of text) covering the years 1172, 1470, 1461 and 1468 are included under the topic Early O-kegley History in all our PDF Extended History products and printed products wherever possible.

The archives that survive today demonstrate the difficulty experienced by the scribes of the Middle Ages in their attempts to record these names in writing. Spelling variations of the name O-kegley dating from that time include O'Quigley, Quigley, Cogley, Quigly, Quigg, MacQuigg, McQuigge, O'Quigg, Twigg, Fivey and many more.

Notable among the family name at this time was Patrick Cogley (died after 1470), an Irish Crown official, landowner and judge who was listed in 1461 as Master of the Rolls in Ireland and later Chief...
Another 35 words (2 lines of text) are included under the topic Early O-kegley Notables in all our PDF Extended History products and printed products wherever possible.

Migration of the O-kegley family

In the 18th and 19th centuries, thousands of Irish families fled an Ireland that was forcibly held through by England through its imperialistic policies. A large portion of these families crossed the Atlantic to the shores of North America. The fate of these families depended on when they immigrated and the political allegiances they showed after they arrived. Settlers that arrived before the American War of Independence may have moved north to Canada at the war's conclusion as United Empire Loyalists. Such Loyalists were granted land along the St. Lawrence River and the Niagara Peninsula. Those that fought for the revolution occasionally gained the land that the fleeing Loyalist vacated. After this period, free land and an agrarian lifestyle were not so easy to come by in the East. So when seemingly innumerable Irish immigrants arrived during the Great Potato Famine of the late 1840s, free land for all was out of the question. These settlers were instead put to work building railroads, coal mines, bridges, and canals. Whenever they came, Irish settlers made an inestimable contribution to the building of the New World. Early North American immigration records have revealed a number of people bearing the Irish name O-kegley or a variant listed above, including: Andrew, Hugh, James, John, Joseph, Neil, Thomas and William Quigg all arrived in Philadelphia between 1800 and 1870; Andrew, Charles, Daniel, Edward, Francis, George, Hugh, James, John, Michael, Patrick, Thomas and William Quigley all arrived in Philadelphia between 1800 and 1870.