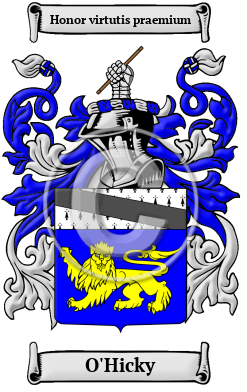 While many Irish names are familiar, their past incarnations are often shrouded in mystery, reflecting the ancient Gaelic heritage of their bearers. The original Gaelic form of the name O'Hicky is O hIcidhe, originally derived from the word "iceadh," which refers to a "physician" or "healer."

Early Origins of the O'Hicky family

The surname O'Hicky was first found in County Clare (Irish: An Clár) located on the west coast of Ireland in the province of Munster, where they held a family seat from very ancient times.

Early History of the O'Hicky family

This web page shows only a small excerpt of our O'Hicky research. Another 89 words (6 lines of text) covering the years 1014, 1641 and 1641 are included under the topic Early O'Hicky History in all our PDF Extended History products and printed products wherever possible.

Lacking standardized spellings, scribes and church officials recorded people's name according to how they sounded. This practice often led to the misleading result of one person's name being recorded under several different spellings. Numerous spelling variations of the surname O'Hicky are preserved in the archival documents of the period. The various spellings of the name that were found include Hickey, Hickie, O'Hickey, O'Hickie, Hicky and others.

Notable among the family name at this time was Antony Hickey (d. 1641), Irish theologian who belonged to the Irish family of h-Icidhe, of co. Clare, many members of which practised medicine during some generations. "Hickey projected publications on the history and hagiography of Ireland, for which his acquirements and...
Another 50 words (4 lines of text) are included under the topic Early O'Hicky Notables in all our PDF Extended History products and printed products wherever possible.

Migration of the O'Hicky family

Irish immigrants began to leave the English-controlled Ireland in sizable numbers during the late 18th century. Many of these Irish immigrated to British North America or the United States in the hopes of gaining their own tract of farmland. This pattern of migration grew steadily until the 1840s when the Great Potato Famine caused a great exodus of immigrants to North America. These immigrants differed from their predecessors in that they were desperately fleeing the disease and starvation that plagued their homeland, and many were entirely destitute when they arrived in North America. Although these penniless immigrants were not warmly welcomed when they arrived, they were critical to the rapid development of the United States and what would become known as Canada. Many went to populate the western frontiers and others provided the cheap labor the new manufacturing sector and the building of bridges, roads, railways, and canals required. A thorough examination of immigration and passenger lists has revealed some of the earliest people to arrive in North America with name O'Hicky or one of its variants: James Hickey settled in Boston in 1768; Catharine Hickey settled in Pennsylvania in 1772; Daniel, Denis, Edward, James, John, Lawrence, Michael, Patrick, Thomas, and William Hickey arrived in Pennsylvania between 1840 and 1855. In Newfoundland, William Hickey settled in St. John's in 1755.