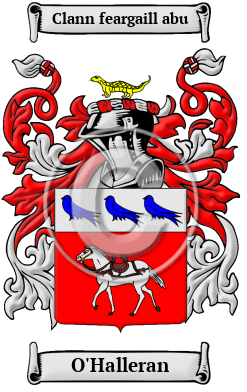 The name O'Halleran originally appeared in Gaelic as O hAllmhurain, which is derived from the word allmhurach, which means pirate. [1]

The main branch of the family claim descent through the O'Connors (Kings of Connaught) and as such from the Heremon Kings of Ireland. [2]

Early Origins of the O'Halleran family

The surname O'Halleran was first found in counties of Clare and Galway (Irish: Gaillimh) part of the province of Connacht, located on the west coast of the Island, where they held a family seat from very ancient times. The Holleran variant is typical to Counties Galway and Mayo. [3]

"This family were, as the name implies, 'importers' of Wine; and were lords of Clan Fergail, a district in which Galway town is situate; and had their castle at Barns, close to the sea-side, about three miles west of Galway. The MS. Vol. H. 2.17, in the Library of Trinity College, Dublin, states that 'O'Halloran is the chief of twenty-four townlands on Clan Fergail; and of theses are the O'Antuiles and O'Fergus of Roscam.' That statement refers to the twelve century. These twenty-four townlands of Clan Fergail lay east of the river Gallimh (or 'Galway.') In the 13th century the O'Hallorans were dispossessed of their ancient inheritance of Clan Fergail by the De Burgos [(Burke)] invaders. The O'Hallorans and the O'Flahertys, [moved] to Iar (or West) Connaught, where they built the castle of O'Hery in Gnomore; and according to tradition, the castle or Rinville in Northern Connenara. According to the Chronicles of the Wars of Thomond, at A.D. 1309, there was another family of the O'Hallorans in Thomond, descended from the stock of the O'Briens and other Dalcassians in Munster." [2]

Early History of the O'Halleran family

This web page shows only a small excerpt of our O'Halleran research. Another 69 words (5 lines of text) are included under the topic Early O'Halleran History in all our PDF Extended History products and printed products wherever possible.

During the Middle Ages, a person's name was often recorded under several spelling variations during a single lifetime because it was essentially up to the individual scribe's discretion as to how to record an individual's name. Research into the name O'Halleran revealed many variations, including Halloran, O'Halloran, Haloran and others.

More information is included under the topic Early O'Halleran Notables in all our PDF Extended History products and printed products wherever possible.

O'Halleran migration to the United States +

North America received thousands of Irish immigrants from the English-ruled Ireland during the 19th century. Once in the United States or what would become Canada, these immigrants quickly contributed to the ongoing settling and industrialization processes. The largest influx of Irish settlers occurred with Great Potato Famine of the late 1840s. An exhaustive examination of immigrant and passenger lists has shown many early immigrants bearing the surname of O'Halleran:

O'Halleran Settlers in United States in the 19th Century

O'Halleran Settlers in United States in the 20th Century

O'Halleran Settlers in Canada in the 20th Century