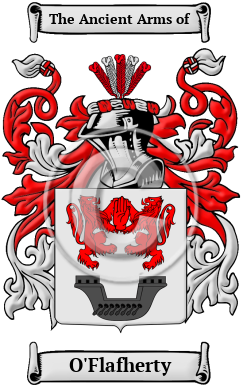 The Irish surnames in use today are underpinned by a multitude of rich histories. The name O'Flafherty originally appeared in Gaelic as "O Flaithbheartaigh," which means "bright ruler."

Early Origins of the O'Flafherty family

Another source gives this background about the family: "This family, whose tribe name was Muintir Murchadha, traced their descent from Flaibheartach, twenty-second in descent from Eochaidh Muighmeadhon, king of Ireland, who died in 366. They were at first settled in Magh Seola, to the east of Lough Corrib, but in the thirteenth century were driven from their original home by the O'Connors, and conquered a new territory in West Connaught from Lough Corrib to the sea. There were several septs of the clan." [3]

Early History of the O'Flafherty family

This web page shows only a small excerpt of our O'Flafherty research. Another 135 words (10 lines of text) covering the years 1377, 1407, 1593, 1589, 1629 and 1718 are included under the topic Early O'Flafherty History in all our PDF Extended History products and printed products wherever possible.

Scribes and church officials, lacking today's standardized spelling rules, recorded names by how they were pronounced. This imprecise guide often led to the misleading result of one person's name being recorded under several different spellings. Numerous spelling variations of the surname O'Flafherty are preserved in documents of the family history. The various spellings of the name that were found include Flaherty, O'Flaherty, Flaverty, Laverty, Faherty and many more.

Migration of the O'Flafherty family

Ireland saw an enormous decrease in its population in the 19th century due to immigration and death. This pattern of immigration began slowly in the late 18th century and gradually grew throughout the early portion of the 19th century. However, a dramatic increase in the country's immigration numbers occurred when the Great Potato Famine struck in the 1840s. The early immigrants to North America were primarily destined to be farmers tending to their own plot of land, those that came later initially settled within pre-established urban centers. These urban immigrants provided the cheap labor that the fast developing United States and soon to be Canada required. Regardless of their new lifestyle in North America, the Irish immigrants to the United States and Canada made invaluable contributions to their newly adopted societies. An investigation of immigrant and passenger lists revealed many O'Flafhertys: James Flaherty who landed in Virginia in 1651; followed James Flaharty in 1651; Timothy Flaharty settled in Boston Massachusetts in 1767; Ann Flaherty settled in New York in 1850.