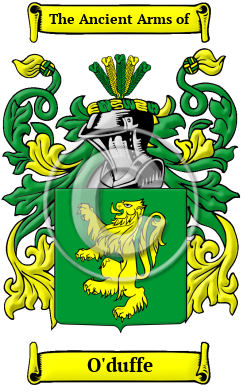 The original Gaelic form of O'duffe was O Dubhthaigh. The first portion of the name is the word "dubh," which means "black," while the second portion is likely an obsolete Irish forename. The sept claim descent from the ancient Heremon Kings of Ireland. Through O'Conner Faley, Lords of Offaley (now Offaly), they descend from "Cahir Mor, King of Leinster in the beginning of the second century. He divided his great possessions amongst his thirty sons in a Will called 'The will of Cahir More,' contained in the 'Book of Leacan' and in the 'Book of Balymote.' His posterity formed the principal families in Leinster." [1] O'Duffy was listed as one of these such families.

Early Origins of the O'duffe family

The surname O'duffe was first found in Connacht (Irish: Connachta, (land of the) descendants of Conn), where they held a family seat from very ancient times, and were one of the many families descended from the great Kings of Ireland called the "Three Collas." Descending from the Clan Colla was Duffy, Lord of Fermanagh.

Early History of the O'duffe family

Pronunciation, rather than spelling, guided scribes and church officials when recording names during the Middle Ages. This practice often resulted in one person's name being recorded under several different spellings. Numerous spelling variations of the surname O'duffe are preserved in these old documents. The various spellings of the name that were found include Duffey, Duff, Duffy, O'Duffey, O'Duffy, Duffe, O'Duffe, Doey, Dohey, Doohey, O'Dowey and many more.

Prominent amongst the family at this time was Father Eugene O'Duffy (c. 1527-1615), preacher and satirist on the apostate bishop Miler Magrath; The Most Reverend Patrick...
Another 26 words (2 lines of text) are included under the topic Early O'duffe Notables in all our PDF Extended History products and printed products wherever possible.

Migration of the O'duffe family

During the 19th century thousands of impoverished Irish families made the long journey to British North America and the United States. These people were leaving a land that had become beset with poverty, lack of opportunity, and hunger. In North America, they hoped to find land, work, and political and religious freedoms. Although the majority of the immigrants that survived the long sea passage did make these discoveries, it was not without much perseverance and hard work: by the mid-19th century land suitable for agriculture was short supply, especially in British North America, in the east; the work available was generally low paying and physically taxing construction or factory work; and the English stereotypes concerning the Irish, although less frequent and vehement, were, nevertheless, present in the land of freedom, liberty, and equality for all men. The largest influx of Irish settlers occurred with Great Potato Famine during the late 1840s. Research into passenger and immigration lists has brought forth evidence of the early members of the O'duffe family in North America: Alice Duffey who landed in Maryland in 1724. In Newfoundland, Philip Duffy settled in Harbour Grace in 1827; Thomas Duffey settled in St. John's in 1829.