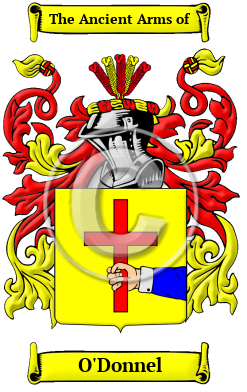 The original Gaelic form of O'Donnel was O'Domhnaill, which means descendant of Domhnall or descendant of Donal(l.) The name is derived from the Irish words "domhan" (the world) and "all" (mighty): son of Colga, a quo O'Domhnaill. [1] The surname claims descendancy from the Heremon Kings of Ireland. [1]

Early Origins of the O'Donnel family

The surname O'Donnel was first found in County Galway (Irish: Gaillimh) part of the province of Connacht, located on the west coast of the Island, where records show this distinguished Irish Clann were directly descended from Connell, son of King Niall of the Nine Hostages who died in 371. Today the most numerous listing of the name can be found in Tirconaill (Donegal), but there are two other branches that are significant, those in Corcabaskin in West Clare, and those of the Ui Maine (Hy Many) in County Galway. [2] All descend from the same ancestor name Domhnall (English: Donal) and are O Domhnaill (Irish Gaelic.) The Donegal "promedominance only dates from the thirteenth century; prior to that they were located in the comparatively restricted area around Kilmacrenan, County Donegal." [2]

Early History of the O'Donnel family

This web page shows only a small excerpt of our O'Donnel research. Another 68 words (5 lines of text) covering the years 1571, 1602, 1601, 1602, 1575 and 1608 are included under the topic Early O'Donnel History in all our PDF Extended History products and printed products wherever possible.

People who were accounted for by scribes and church officials often had their name recorded many different ways because pronunciation was the only guide those scribes and church officials had to go by. This resulted in the problem of one person's name being recorded under several different variations, creating the illusion of more than one person. Among the many spelling variations of the surname O'Donnel that are preserved in archival documents are O Donnell, O'Donald, O'Donle, O'Donall, O'Donnell and others.

Notable amongst the family name at this time was Red Hugh O'Donnell (1571-1602), Irish chieftain and Earl of Tyrconnel, who fought against the English, but was defeated, with Hugh O'Neill, 2d Earl of Tyrone, at Kinsale in 1601. He was succeeded in...
Another 42 words (3 lines of text) are included under the topic Early O'Donnel Notables in all our PDF Extended History products and printed products wherever possible.

O'Donnel migration to the United States +

A great mass of Ireland's native population left the island in the 19th century, seeking relief from various forms of social, religious, and economic discrimination. This Irish exodus was primarily to North America. If the migrants survived the long ocean journey, many unfortunately would find more discrimination in the colonies of British North America and the fledgling United States of America. These newly arrived Irish were, however, wanted as a cheap source of labor for the many large agricultural and industrial projects that were essential to the development of what would become two of the wealthiest nations in the western world. Early immigration and passenger lists indicate many people bearing the O'Donnel name:

O'Donnel Settlers in United States in the 19th Century

O'Donnel Settlers in Australia in the 19th Century