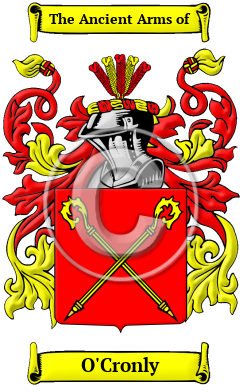 Early Origins of the O'Cronly family

The surname O'Cronly was first found in Ulster (Irish: Ulaidh), where they held a family seat but were also to be found in County Offaly and Galway. The sept is styled the Princes of Crich Cualgne and are descended from Cu-Ulladh, a Prince in 576. Descended was Cronghall, in 935, Lord of Conaille, the first to style himself O'Connelly. Irish history was greatly influenced by the Norman invasion of 1172, and thereafter, the surnames of Irish Gaelic clanns and septs and many of the Norman families became almost indistinguishable.

One of the first records of the family was Thomas Cranley (1337?-1417), Archbishop of Dublin, who studied at Oxford. In 1390, he was Cchancellor of the university. "Besides being archbishop, Cranley was Chancellor of Ireland under Henry IV, and Lord Justice under Henry V." [1]

Early History of the O'Cronly family

This web page shows only a small excerpt of our O'Cronly research. Another 140 words (10 lines of text) covering the years 1397, 1651, 1635 and 1635 are included under the topic Early O'Cronly History in all our PDF Extended History products and printed products wherever possible.

Another 40 words (3 lines of text) are included under the topic Early O'Cronly Notables in all our PDF Extended History products and printed products wherever possible.

Migration of the O'Cronly family