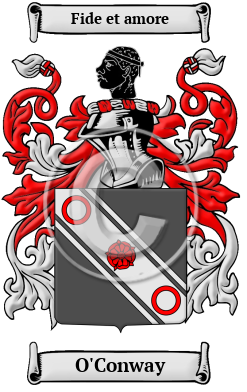 All Irish surnames have a long, ancient Gaelic history behind them. The original Gaelic form of the name O'Conway is O Conbhuidhe or O Connmhachain. The former of these names likely comes from the Gaelic word "condmach," while the latter probably comes from "cu buidhe." Conway is also an Anglicization of the names Mac Conmheadha or Mac Connmhaigh.

Early Origins of the O'Conway family

The surname O'Conway was first found in Donegal (Irish: Dún na nGall), northwest Ireland in the province of Ulster, sometimes referred to as County Tyrconnel, and Connacht.

Early History of the O'Conway family

Individual scribes in the Ireland during the Middle Ages would often record a person's name various ways. How the name was recorded depended on what that particular scribe believed the proper spelling for the name pronounced to him was. Spelling variations revealed in the search for the origin of the O'Conway family name include Conway, Conboy, Convey, O'Conway, McConway and others.

Prominent amongst the family at this time was Edward Conway, 1st Viscount Conway PC (1564-1631), an English soldier and statesman, Secretary of State in 1623, Lord President of the Council (1628-1631); his son, Edward Conway, 2nd Viscount Conway PC (1594-1655), an English politician, military commander and peer; and his son, Edward Conway, 1st Earl of Conway PC...
Another 56 words (4 lines of text) are included under the topic Early O'Conway Notables in all our PDF Extended History products and printed products wherever possible.

Migration of the O'Conway family

In the late 18th century, Irish families began emigrating to North America in the search of a plot of land to call their own. This pattern of emigration grew steadily until the 1840s when the Great Potato Famine of the 1840s cause thousands of Irish to flee the death and disease that accompanied the disaster. Those that made it alive to the shores of the United States and British North America (later to become Canada) were, however, instrumental in the development of those two powerful nations. Many of these Irish immigrants proudly bore the name of O'Conway: Edwin Conway of Worcestershire, England, who settled in the year 1645 in Virginia. From him was descended Mary Ball, the mother of George Washington.