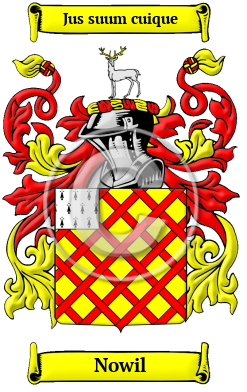 The name Nowil comes from the ancient Norman culture that was established in Britain after the Conquest of 1066. It was a name for a person who was connected in some way with the Christmas season. Such a name may have been attached to the person whose duty it was to provide the Yule log to the Lord of the manor, although this connection is by no means exclusive.

Early Origins of the Nowil family

The surname Nowil was first found in Staffordshire at Ranton, home of Ranton Abbey and Ranton Priory, built c.1150 by Robert fitz Noel of Ellenhall. [1] The ruins of Abbey House remain today but most of the building fell to ruin by the late 1600s. For Noel's services as a companion to William the Conqueror, he received the aforementioned priory plus the manors of Ellenhall, Wiverstone, Podmore and Milnese. His eldest son, Robert Noel, Lord of Ellenhall, was granted the greater part of Gainsborough from the Prior of Coventry temp. Henry I. From him derived the Noels of Hilcote and the Noels of the counties of Rutland and Leicester. [2]

"The Hall [of Ellenhall] belonged to the ancient family of the Noels, from whom descended the Noels of Hilcote, in this county, and the Noels of Ridlington, in Rutlandshire; it afterwards passed, with the manor, by marriage, to the Harcourts." [3]

The Hundredorum Rolls of 1273 list Ralph Noel in Huntingdonshire and Noel de Aubtanis in Somerset. [4] Kirby's Quest listed the name as a forename in Somerset as in: Noel atte Wynde, [5]

The hamlet of Moxhull in Warwickshire played an important part in the family's lineage. "It is situated to the west of the Birmingham and Fazeley canal; and is chiefly distinguished as the residence of Berkeley Noel, Esq., whose seat of Moxhull Park is bounded on the east by the high road: the house was built about the 14th century, and is a substantial edifice, containing some ancient portraits of members of the Noel and Hacket families." [3]

Another branch of the family was found in Exton, Rutland. "The church is a spacious and elegant structure, chiefly in the early, and partly in the later, English style, with a tower strengthened by buttresses, and surmounted by a spire; it contains several finely-executed monuments to the Noel family and their connexions." [3]

Yes another branch of the family was found at Little Mearley in Lancashire. "The hamlet and manor of Little Mearley, in the township, still remain in the descendants of William Nowell, the first grantee under John de Lacy, who died in the year 1240." [3]

Early History of the Nowil family

Anglo-Norman names are characterized by a multitude of spelling variations. When the Normans became the ruling people of England in the 11th century, they introduced a new language into a society where the main languages of Old and later Middle English had no definite spelling rules. These languages were more often spoken than written, so they blended freely with one another. Contributing to this mixing of tongues was the fact that medieval scribes spelled words according to sound, ensuring that a person's name would appear differently in nearly every document in which it was recorded. The name has been spelled Noel, Noell, Nole and others.

Outstanding amongst the family at this time was Alexander Nowell (c. 1507-1602), an English Puritan theologian and clergyman, Dean of St Paul's; Laurence Nowell (c. 1515-c. 1571), an English antiquarian, a cartographer and a pioneering scholar of Anglo-Saxon language and literature, best known for his Nowell Codex, a collection that included the epic poem Beowulf and a fragment of The Life of Saint Christopher; Laurence Nowell (died 1576) English churchman, Archdeacon of Derby (1558) and later Dean of Lichfield (1560); Sir Martin Noell, knighted in...
Another 85 words (6 lines of text) are included under the topic Early Nowil Notables in all our PDF Extended History products and printed products wherever possible.

Migration of the Nowil family

For many English families, the political and religious disarray that plagued their homeland made the frontiers of the New World an attractive prospect. Thousands migrated, aboard cramped disease-ridden ships. They arrived sick, poor, and hungry, but were welcomed in many cases with far greater opportunity than at home in England. Many of these hardy settlers went on to make important contributions to the emerging nations in which they landed. Among early immigrants bearing the name Nowil or a variant listed above were: Peter Noel and Joseph Noel, who arrived in Philadelphia in 1736; Fred Noel, who arrived in New York in 1837; as well as Charlotte Noel and her husband, who arrived in New York in 1821..

Motto: Jus suum cuique
Motto Translation: To every man his own.