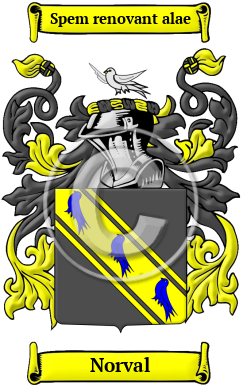 The surname Norval was originally a habitation name, that is, a surname derived from a place-name. The Norval family took the name of a town of Normanville in the French province of Normandy, prior to emigration to Britain.

Early Origins of the Norval family

The surname Norval was first found in Berwickshire an ancient county of Scotland, presently part of the Scottish Borders Council Area, located in the eastern part of the Borders Region of Scotland, where they held a family seat being descended from John of Normanville in Yvetot in Normandy.

Early History of the Norval family

This web page shows only a small excerpt of our Norval research. Another 118 words (8 lines of text) covering the years 1200, 1242 and 1605 are included under the topic Early Norval History in all our PDF Extended History products and printed products wherever possible.

More information is included under the topic Early Norval Notables in all our PDF Extended History products and printed products wherever possible.

Norval migration to the United States +

Norval Settlers in United States in the 19th Century

Norval Settlers in United States in the 20th Century

Norval Settlers in Canada in the 20th Century