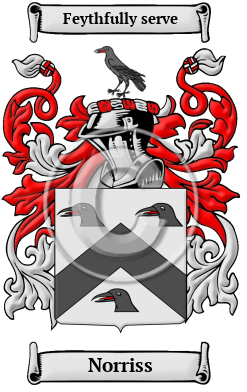 The history of the name Norriss goes back those Anglo-Saxon tribes that once ruled over Britain. Such a name was given to a person from the north. The surname is usually derived from the Anglo-French words noreis and norreis, which both mean northerner. [1] Occasionally, Norriss is an occupational name for a nurse; in this case, the derivation is from the Old French word norrice, which means nurse. Lastly, the surname Norriss is sometimes a local surname for a "dweller at the north house." [2]

Early Origins of the Norriss family

The surname Norriss was first found in Hampstead Norreys (Hampstead Norris), a village and civil parish in Berkshire. Dating back to the Domesday Book, where it was listed as Hanstede [3], the village is today still noted for its Norman parish church and the remains of a Norman motte-and-bailey castle nearby.

"Petrus Norreis" is found in the Norman Exchequer Rolls, about 1198, and several of the name in England at the same date. [4] "Henry le Norreys was seized of estates in Nottinghamshire, which on his death King John granted to Alan le Norreys, his brother." [5]

Another noted source claims: "Their undoubted ancestor was Richard de Norreys, the favourite cook of Henry III.'s Queen, Eleanor of Provence, who was rewarded in 1267 by a grant of the manor of Ocholt in Berk­shire, "subject to a fee farm rent of 40s., and stated to have been an encroach­ment from the forest." [6]

The village of Hampstead Norreys changed its name to Hampstede Norreys, when the Norreys family bought the manor in 1448. A branch of the family was found in Speke, Lancashire where at one time they held Speke Hall. "The Norris family had, however, before this begun to acquire lands in the township, Alan le Norreys of Speke being apparently the first to do so. A younger son of Alan, John le Norreys, established himself at Woolton. John's elder son John, who succeeded, is mentioned in the settlement made by Sir Henry le Norreys in 1367." [4]

In the 14th century, some of the family were found in West Derby, Lancashire. "The Norris family had an estate here in the fourteenth century, acquired by William, a younger son of John le Norreys of Speke. It descended in the fifteenth century to Thomas Norris, whose daughter and heir Lettice married her distant cousin Thomas Norris of Speke, and so carried the estate back to the parent stock. One of their grandsons, William Norris, was settled here, his estate remaining with his descendants to the end of the seventeenth century. The family remained constant to the Roman Church and had to face loss and suffering in consequence, especially during the Commonwealth; thus the threat of a fresh outbreak of persecution as a result of the Oates plot appears to have broken the resolution of 'Mr. Norris of Derby,' who conformed to the legally established religion in 1681. Norris Green is supposed to indicate the site of their estate." [4]

"From the de Erneys it came, also by marriage, to the family of Norres, of whom was Sir William Norres, who brought from the palace of Holyrood, at Edinburgh, part of the royal library and some curious pieces of fine oak wainscot, to Speke Hall: this mansion was re-erected by Sir Edward Norres. The family retained the manor until the 18th century, when their heiress married Lord Sidney Beauclerk, fifth son of Charles, Duke of St. Alban's; whose grandson, Charles George, sold Speke to the Watt family. The great hall is very lofty, with wainscot and a ceiling of oak, and having a mantelpiece brought from Holyrood: at each angle of the southern wall, within the court, are two spacious corbelled windows, one of which lights the hall. The house was originally surrounded by a moat, of which the outlines remain, and over which a bridge leads to the principal entrance. The whole forms a highly interesting specimen of old English domestic architecture." [8]

Early History of the Norriss family

Sound was what guided spelling in the essentially pre-literate Middle Ages, so one person's name was often recorded under several variations during a single lifetime. Also, before the advent of the printing press and the first dictionaries, the English language was not standardized. Therefore, spelling variations were common, even among the names of the most literate people. Known variations of the Norriss family name include Norreys, Norris, Norres, Norrice, Norrish and others.

Distinguished members of the family include Lady Alice Norreys (c. 1405-1450), an English Lady of the Most Noble Order of the Garter; Sir William Norreys (1433-1507), a famous Lancastrian soldier, and later an Esquire of the Body to King Edward IV; Henry Norris "Norreys" (1525-1601), created 1st Baron Norreys in 1572; Francis Norris (1579-1622), 2nd Baron Norreys, who was made Earl of Berkshire and Viscount Thame in 1622, one day...
Another 69 words (5 lines of text) are included under the topic Early Norriss Notables in all our PDF Extended History products and printed products wherever possible.

Migration of the Norriss family to Ireland

Some of the Norriss family moved to Ireland, but this topic is not covered in this excerpt.
Another 147 words (10 lines of text) about their life in Ireland is included in all our PDF Extended History products and printed products wherever possible.

Migration of the Norriss family

For political, religious, and economic reasons, thousands of English families boarded ships for Ireland, the Canadas, the America colonies, and many of smaller tropical colonies in the hope of finding better lives abroad. Although the passage on the cramped, dank ships caused many to arrive in the New World diseased and starving, those families that survived the trip often went on to make valuable contributions to those new societies to which they arrived. Investigation of the origins of family names on the North American continent has revealed that early immigrants bearing the name Norriss or a variant listed above: Edward Norris, who came to Salem in 1630; Able and Thomas Norrice, who settled in Virginia in 1643; Richard Norris, who settled in Virginia in 1643; Samuel Norris, who arrived in Barbados with his servants in 1679.