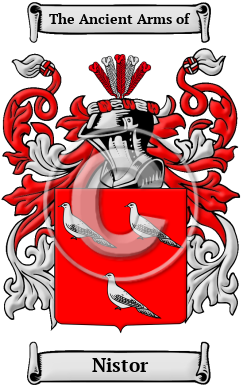 Early Origins of the Nistor family

The surname Nistor was first found in Sussex where the Pipe Rolls of 1185 list as a forename, Nest de Barri. The same rolls list as a surname, Adam Nest in Dorset. Years later, the name Nesta was found in the Assize Rolls for Worcester in 1221 and the Curia Regis Rolls for Oxfordshire in 1222. Nesta de Broketon was found in the Feet of Fines for Warwickshire in 1254 and Richard Neste was in the Subsidy Rolls for Essex in 1327. The name may be a Welsh diminutive of the name Agnes as James Nest occurs in the Registrar-General's List of Names. [1]

Yorkshire records revealed William Neste as holding lands there in the Yorkshire Poll Tax Rolls of 1379. [2]

The Nestor and Nester variants are generally thought to be Irish, having derived from the the Gaelic Mac Girr an Adhastair, meaning son of the short man of the bridle. The surname is most common in County Galway and County Clare. [3]

Early History of the Nistor family

This web page shows only a small excerpt of our Nistor research. Another 74 words (5 lines of text) covering the years 1455 and 1487 are included under the topic Early Nistor History in all our PDF Extended History products and printed products wherever possible.

One relatively recent invention that did much to standardize English spelling was the printing press. However, before its invention even the most literate people recorded their names according to sound rather than spelling. The spelling variations under which the name Nistor has appeared include Ness, Nest, Nessi, Nas, Nassi, Nesti, Nass, Noss, Nestor and many more.

More information is included under the topic Early Nistor Notables in all our PDF Extended History products and printed products wherever possible.

Migration of the Nistor family

At this time, the shores of the New World beckoned many English families that felt that the social climate in England was oppressive and lacked opportunity for change. Thousands left England at great expense in ships that were overcrowded and full of disease. A great portion of these settlers never survived the journey and even a greater number arrived sick, starving, and without a penny. The survivors, however, were often greeted with greater opportunity than they could have experienced back home. These English settlers made significant contributions to those colonies that would eventually become the United States and Canada. An examination of early immigration records and passenger ship lists revealed that people bearing the name Nistor arrived in North America very early: George Nest who was listed in the Bristol Register of Servants sent to Foreign Plantations, in 1675; Ellinor Nest, listed in two records in Virginia in 1688 and in 1690. Ann Cath. Ness went to New York, N.Y. in the fall of 1710 and was given aid by the British Government to survive her first winter there, a debt which she, among hundreds of others, did not repay. In 1731.