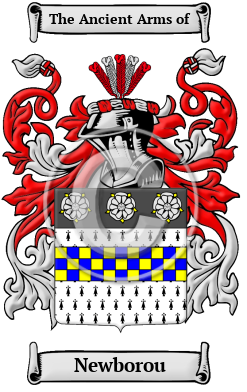 The Norman Conquest of England in 1066 added many new elements to an already vibrant culture. Among these were thousands of new names. The Newborou family lived in Neufbourg, Normandy. "Henry de Newburgh (so named from the castle of Neufbourg, where he was born) was the younger son of Roger de Bellomont Earl of Mellent, and the brother of Robert, afterwards Earl of Leicester. He himself obtained the Earldom of Warwick towards the latter end of the Conqueror's reign, ' when,' says Dugdale, 'King William, having begirt Warwick with a mighty ditch, for the precinct of its walls, and erected the gates at his own charge, did promote this Henry to the earldom, and annexed thereto the royalty of the borough, which at that time belonged to the crown.' Here, 'upon the site of the tower illustrated by the traditions of Guy, the great opponent of the Danes,' he built his castle, which, enlarged and strengthened during the long succession of its powerful lords, became one of the most renowned of English fortresses, and remains 'the glory of the Midland shires. ' William Rufus further bestowed upon him all the lands that had belonged to his Saxon predecessor Thurkill, whose daughter and heir Margaret, Leland tells us, he had married. " [1]

Early Origins of the Newborou family

The surname Newborou was first found in Warwickshire. It is generally thought that the "founder of this family was Henry de Newburgh, so called from the castle of that name in Normandy, a younger son of Roger de Bellomonte, Earl of Mellent. He came in [to England] with the Conqueror, and was created Earl of Warwick. " [3]

Early History of the Newborou family

This web page shows only a small excerpt of our Newborou research. Another 104 words (7 lines of text) covering the years 126 and 1267 are included under the topic Early Newborou History in all our PDF Extended History products and printed products wherever possible.

Norman surnames are characterized by a multitude of spelling variations. The frequent changes in surnames are largely due to the fact that the Old and Middle English languages lacked definite spelling rules. The introduction of Norman French to England, as well as the official court languages of Latin and French, also had pronounced influences on the spelling of surnames. Since medieval scribes and church officials recorded names as they sounded, rather than adhering to any specific spelling rules, it was common to find the same individual referred to with different spellings. The name has been spelled Newborough, Newburgh and others.

More information is included under the topic Early Newborou Notables in all our PDF Extended History products and printed products wherever possible.

Migration of the Newborou family

Many English families emigrated to North American colonies in order to escape the political chaos in Britain at this time. Unfortunately, many English families made the trip to the New World under extremely harsh conditions. Overcrowding on the ships caused the majority of the immigrants to arrive diseased, famished, and destitute from the long journey across the stormy Atlantic. Despite these hardships, many of the families prospered and went on to make invaluable contributions to the development of the cultures of the United States and Canada. Early North American immigration records have revealed a number of people bearing the name Newborou or a variant listed above: E. P. Newbrough settled in San Francisco in 1850; Thomas NewBerry settled in New England in 1630; John Newberry settled in New York in 1775.