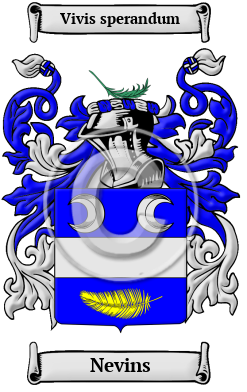 In ancient Scotland, the first people to use Nevins as a surname were the Strathclyde-Britons. It was a name someone who lived in Ayrshire. The surname Nevins was also regarded as derived from the Gaelic patronymic Mac Naoimhin, which is derived from the word "naomh," meaning "little saint." The name was a favorite personal name in Galloway and Ayrshire. [1] [2]

Early Origins of the Nevins family

The surname Nevins was first found in Ayrshire (Gaelic: Siorrachd Inbhir Àir), formerly a county in the southwestern Strathclyde region of Scotland, where the first record of the family appeared in the Latin form Nevinus, who was parson of Neveth and witnessed grant of a saltpan in Rosneath to the monks of Paisley, c. 1230. [1]

Early History of the Nevins family

The origin of rules governing the spelling of names and even words is a very recent innovation. Before that, words and names were spelled according to sound, and, therefore, often appeared under several different spelling variations in a single document. Nevins has been spelled Niven, Nevin, Nevins, Nivens, Navin, Newin, Nevane, Niffen, Nifen, Niving, Neving, Newing, Neiven, Nivine, Nevison, Niveson and many more.

Notable amongst the family at this time was Kate McNiven (died 1715), also called Kate Nevin, a young nurse who served the House of Inchbrakie in the Parish of Monzie, near Crieff in Scotland in the early 1700s, she was one of the...
Another 43 words (3 lines of text) are included under the topic Early Nevins Notables in all our PDF Extended History products and printed products wherever possible.

In the United States, the name Nevins is the 7,660th most popular surname with an estimated 2,487 people with that name. [5]

Migration of the Nevins family to Ireland

Some of the Nevins family moved to Ireland, but this topic is not covered in this excerpt.
Another 221 words (16 lines of text) about their life in Ireland is included in all our PDF Extended History products and printed products wherever possible.

Nevins migration to the United States +

Nevins Settlers in United States in the 18th Century

Nevins Settlers in United States in the 19th Century