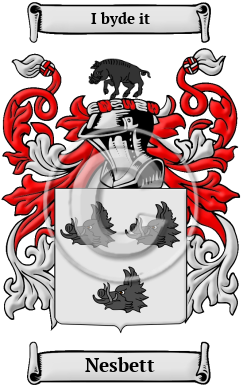 Nesbett is a name whose roots are found in the clans of the Boernician people of ancient Scotland. The Nesbett family lived in any of several places in the Border region of Scotland called Nesbitt or Nisbit. There were hamlets of East Nisbet and West Nisbet in Berwickshire, a village of Nisbet in Roxburghshire, a Nesbit in Northumberland, and a township of Nesbit in County Durham. [1] These place names derive from the Middle English words nese, meaning "nose," and bit, meaning a "piece of ground;" as such, these place names are thought to have referred to geographic features resembling a nose. The surname may well have arisen independently from these different place names.

Early Origins of the Nesbett family

The surname Nesbett was first found in Berwickshire an ancient county of Scotland, presently part of the Scottish Borders Council Area, located in the eastern part of the Borders Region of Scotland where they held a family seat from early times and King David I confirmed a charter (now in the archives of Durham Cathedral) granting the lands of Nisbet to Aldan de Nisbet, the founder of the line of Nisbet in 1139. According to family lore, they descend from Gospatric, Earl of Northumbria (d. 1073).

Early History of the Nesbett family

Scribes in the Middle Ages simply spelled according to sound. The result is an enormous number of spelling variations among names that evolved in that era. Nesbett has been spelled Nisbet, Nysbit, Nispett, Nispet, Nisbit, Nisbett, Nessbitt, Nessbit, Nesbyth, Nesbitt, Naibet, Nesbeth, Nesbet, Naisbitt, Naisbit, Nesbett, Naisbett, Naibett and many more.

Notable amongst the family name during their early history was Murdoch Nisbet (d. 1559) of Ayrshire, a notary public in the diocese of Glasgow, best known for his Scots translations of the Bible. Philip Nesbit, of that Ilk was knighted in March 1605 by the Earl of Dunfermline, Lord Chancellor of Scotland; he represented Berwickshire...
Another 53 words (4 lines of text) are included under the topic Early Nesbett Notables in all our PDF Extended History products and printed products wherever possible.

Migration of the Nesbett family to Ireland

Some of the Nesbett family moved to Ireland, but this topic is not covered in this excerpt.
Another 92 words (7 lines of text) about their life in Ireland is included in all our PDF Extended History products and printed products wherever possible.

Nesbett migration to the United States +

Most of the Boernician-Scottish families who came to North America settled on the eastern seaboard of what would become the United States and Canada. Families who wanted a new order stayed south in the War of Independence, while those who were still loyal to the crown went north to Canada as United Empire Loyalists. In the 20th century, the ancestors of these families have gone on to rediscover their heritage through Clan societies and other patriotic Scottish organizations. Research into the origins of individual families in North America has revealed records of the immigration of a number of people bearing the name Nesbett or a variant listed above:

Nesbett Settlers in United States in the 19th Century

Nesbett Settlers in Canada in the 18th Century

Nesbett Settlers in Canada in the 19th Century

Nesbett Settlers in Australia in the 19th Century