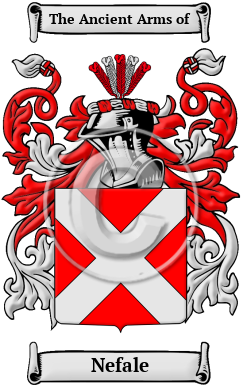 The Norman Conquest of England in 1066 added many new elements to an already vibrant culture. Among these were thousands of new names. The Nefale family lived in Durham. Their name, however, is a reference to Neuville, Sur Touques of Orne in the canton of Gacey, Normandy. "This family descended from Baldric Teutonicus, who with his brother Wiger came to Normandy c.900 to offer his service to the Duke. From him descend the families Neville, Courcy and others." [1]

Early Origins of the Nefale family

The surname Nefale was first found in Durham where they claim descent from Gilbert de Nevil, the companion in arms of the William the Conqueror who many believe was the Duke's Admiral but there is no mention of him in the Domesday Book. [2]

Another early record shows Ranulph de Nevill of Raby, Durham, being summoned to Parliament as a Baron on June 8, 1294. Ralph Neville (died 1244) served as Lord Chancellor of England, Bishop of Chichester and was Archbishop of Canterbury elect from 1231 to 1232.

Wargrave in Berkshire was home to another branch of the family. "The living is a vicarage, valued in the king's books at £13. 13. 6½., and in the gift of the lord of the manor and impropriator, Lord Braybrooke, to whose ancestor, Sir Henry Nevill, the Billingbear estates, and the hundred of Wargrave, anciently attached to the see of Winchester, were granted by Edward VI." [3]

Another branch of the family was found at Dalton-Piercy in Durham. "In 1370, Henry, Lord Percy, sold this manor to Sir John Nevile, of Raby; and it remained with the descendants of that proprietor until the forfeiture by the family, since which time the lands have been divided." [3]

"[Liversedge in the West Riding of Yorkshire] was anciently the property of the Neville family, lords of the manor, of whose mansion, Liversedge Hall, there are still some slight remains." [3]

Early History of the Nefale family

Norman surnames are characterized by a multitude of spelling variations. The frequent changes in surnames are largely due to the fact that the Old and Middle English languages lacked definite spelling rules. The introduction of Norman French to England, as well as the official court languages of Latin and French, also had pronounced influences on the spelling of surnames. Since medieval scribes and church officials recorded names as they sounded, rather than adhering to any specific spelling rules, it was common to find the same individual referred to with different spellings. The name has been spelled Neville, Navelle, Nevile, Nevil, Nevill and others.

Outstanding amongst the family at this time was Richard Neville (1428-1471), who became the 16th Earl of Warwick, through his mother, a countess. He was known as the "Kingmaker" as he played a large role in putting Edward IV on the throne in 1461, deposing him in 1470, and then restoring Henry VI. His younger brother, John Neville, 1st Marquess of Montagu KG (1431-1471) was a major magnate of fifteenth-century England. Sir Thomas Nevill, 1st Baronet (c. 1625-1712), of Holt in Leicestershire, held a Baronetage of England created on 25 May 1661; Sir Edward Nevill, 1st Baronet (c. 1651-1685) of Grove...
Another 127 words (9 lines of text) are included under the topic Early Nefale Notables in all our PDF Extended History products and printed products wherever possible.

Migration of the Nefale family to Ireland

Some of the Nefale family moved to Ireland, but this topic is not covered in this excerpt.
Another 61 words (4 lines of text) about their life in Ireland is included in all our PDF Extended History products and printed products wherever possible.

Migration of the Nefale family

Many English families emigrated to North American colonies in order to escape the political chaos in Britain at this time. Unfortunately, many English families made the trip to the New World under extremely harsh conditions. Overcrowding on the ships caused the majority of the immigrants to arrive diseased, famished, and destitute from the long journey across the stormy Atlantic. Despite these hardships, many of the families prospered and went on to make invaluable contributions to the development of the cultures of the United States and Canada. Early North American immigration records have revealed a number of people bearing the name Nefale or a variant listed above: Edmund Nevell who settled in Maine in 1625; Nicholas Nevell settled in Barbados in 1635; Richard Nevil settled in Virginia in 1650; Michael Nevil settled in Boston in 1762.