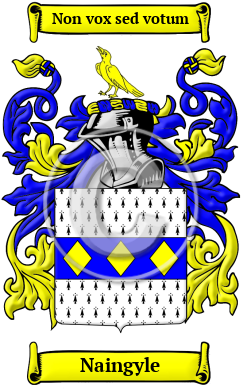 The surname Naingyle is derived from the Norman surname de Angulo. The Gaelic form of this surname is de Nógla.

Early Origins of the Naingyle family

The surname Naingyle was first found in at Milford Haven, Pembrokeshire, SW Wales, where they held a family seat from very early times and were granted lands by Duke William of Normandy, their liege Lord, for their distinguished assistance at the Battle of Hastings in 1066 A.D. The Naingyle surname arrived Cork, where Gilbert D'Angulo accompanied Strongbow into Ireland in 1172.

Early History of the Naingyle family

Notable amongst the family up to this time was Thomas Nangle, 15th Baron of Navan; and his son, John Nangle, 16th Baron of Navan (died before 1508), an Irish nobleman and courageous soldier who fought with distinction at the Battle of Knockdoe; Richard Nangle D.D., Irish prelate of the Provincial of the Order of Saint Augustine, Bishop of Clonfert (1536-1541); Nano...
Another 61 words (4 lines of text) are included under the topic Early Naingyle Notables in all our PDF Extended History products and printed products wherever possible.

Migration of the Naingyle family

Ireland went through one of the most devastating periods in its history with the arrival of the Great Potato Famine of the 1840s. Many also lost their lives from typhus, fever and dysentery. And poverty was the general rule as tenant farmers were often evicted because they could not pay the high rents. Emigration to North America gave hundreds of families a chance at a life where work, freedom, and land ownership were all possible. For those who made the long journey, it meant hope and survival. The Irish emigration to British North America and the United States opened up the gates of industry, commerce, education and the arts. Early immigration and passenger lists have shown many Irish people bearing the name Naingyle: David and Julianna Nagle settled with their six children in Prescott Ontario Canada in 1825; David, Francis, Henry, James, Jeremiah, John, Michael, Patrick, Richard, Thomas, and William Nagle all arrived in Philadelphia between 1840 and 1860.

Motto: Non vox sed votum
Motto Translation: Not in voice but a wish.