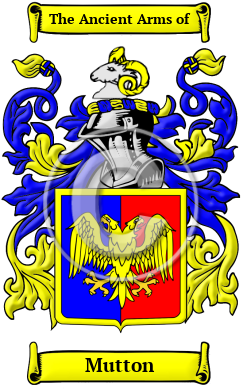 When the ancestors of the Mutton family emigrated to England following the Norman Conquest in 1066 they brought their family name with them. They lived in Mitton, in the West Riding of Yorkshire. Their name, however, is a reference to Moutons, in Calvados, Normandy, the family's place of residence prior to the Norman Conquest of England in 1066. [1]

Early Origins of the Mutton family

The surname Mutton was first found in the West Riding of Yorkshire, but partly in Lancashire. The parish of Little Mitton in Lancashire played an important role in the family's lineage. "It gave name as early as the time of Richard I. to a knightly family, of whom Sir Ralphe de Little Mitton is mentioned in the Townley MSS." [2]

"Aighton [in Lancashire], under the name of Halghton, was granted by Ilbert de Lacy, prior to 1102, with other lands, to a family who is supposed to have taken the surname of Mitton." [2]

Early History of the Mutton family

Spelling variations in names were a common occurrence in the eras before English spelling was standardized a few hundred years ago. In the Middle Ages, even the literate regularly changed the spellings of their names as the English language incorporated elements of French, Latin, and other European languages. Many variations of the name Mutton have been found, including Mytton, Mutton, Myreton, Myrton, Mouton, Myttins, Mitton and many more.

Outstanding amongst the family at this time was Sir Peter Mutton (1565-1637), an English lawyer and politician who sat in the House of Commons between 1604 and 1624; and Thomas Mytton (c.1597-1656), a parliamentarian general of the English Civil War. He was born about 1597, son of Richard Mytton of Halston, Shropshire, by Margaret, daughter of Thomas Owen of Condover, matriculated at Balliol College, Oxford, on 11 May 1615, aged 18. He became a student of Lincoln's Inn in 1616. In 1629 Mytton married Magdalen, daughter of Sir Robert Napier of Luton, Bedfordshire, and sister of the second wife of Sir...
Another 205 words (15 lines of text) are included under the topic Early Mutton Notables in all our PDF Extended History products and printed products wherever possible.

Mutton migration to the United States +

For many English families, the social climate in England was oppressive and lacked opportunity for change. For such families, the shores of Ireland, Australia, and the New World beckoned. They left their homeland at great expense in ships that were overcrowded and full of disease. Many arrived after the long voyage sick, starving, and without a penny. But even those were greeted with greater opportunity than they could have experienced back home. Numerous English settlers who arrived in the United States and Canada at this time went on to make important contributions to the developing cultures of those countries. Many of those families went on to make significant contributions to the rapidly developing colonies in which they settled. Early North American records indicate many people bearing the name Mutton were among those contributors:

Mutton Settlers in United States in the 17th Century

Mutton Settlers in United States in the 19th Century

Mutton Settlers in Canada in the 19th Century

Mutton Settlers in Canada in the 20th Century

Mutton Settlers in Australia in the 19th Century

Mutton Settlers in New Zealand in the 19th Century