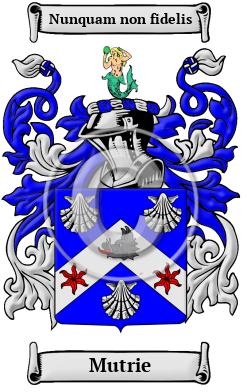 Early Origins of the Mutrie family

The surname Mutrie was first found in Berwickshire where they held a family seat on the English/Scottish border. After the Norman Conquest of England many of Duke William's rebellious Barons moved north. The border became a convenient no-man's land. Notable families such as the Percy, the Umfravilles and the Nevilles gathered many supporting clans around them. In the 16th century they became known as the 'unruly clans'. In that century, many of those clans drove their herds south, and they settled in Yorkshire and Lancashire. The name was first recorded in Moutreve where Adam swore fealty to Edward, the King of England, in 1292.

Early History of the Mutrie family

This web page shows only a small excerpt of our Mutrie research. Another 141 words (10 lines of text) covering the years 1352, 1543, 1733, 1172, 1838 and 1000 are included under the topic Early Mutrie History in all our PDF Extended History products and printed products wherever possible.

Spelling variations of this family name include: Moultrie, Mutrie, Moutray, Moutrey, Mutrich and many more.

More information is included under the topic Early Mutrie Notables in all our PDF Extended History products and printed products wherever possible.

Migration of the Mutrie family to Ireland

Some of the Mutrie family moved to Ireland, but this topic is not covered in this excerpt.
Another 79 words (6 lines of text) about their life in Ireland is included in all our PDF Extended History products and printed products wherever possible.

Mutrie migration to the United States +

Mutrie Settlers in United States in the 20th Century