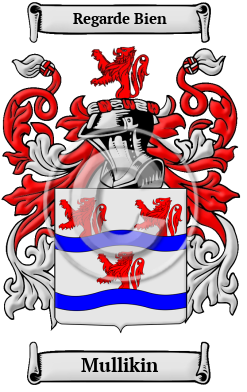 Among the the peoples of ancient Scotland, the first to use the name Mullikin were the Strathclyde-Britons. Mullikin was a name for someone who lived in Wigtown, a former royal burgh in the Machars of Galloway in the south west of Scotland. This burgh is first mentioned in an indenture of 1292, and the fact that the sheriffdom was in existence at the time of the Largs campaign of 1263 suggests that the burgh may also have been recognized as such during the reign of Alexander III.

Early Origins of the Mullikin family

The surname Mullikin was first found in Wigtownshire (Gaelic: Siorrachd Bhaile na h-Uige), formerly a county in southwestern Scotland, now part of the Council Area of Dumfries and Galloway, where they held a family seat from early times and their first records appeared on the early census rolls taken by the early Kings of Scotland to determine the rate of taxation of their subjects.

Early History of the Mullikin family

This web page shows only a small excerpt of our Mullikin research. Another 131 words (9 lines of text) covering the years 1296, 1526, 1612, and 1688 are included under the topic Early Mullikin History in all our PDF Extended History products and printed products wherever possible.

Medieval Scottish names are rife with spelling variations. This is due to the fact that scribes in that era spelled according to the sound of words, rather than any set of rules. Mullikin has been spelled Milligan, Millicen, Millicken, Milliken, Milligan and many more.

More information is included under the topic Early Mullikin Notables in all our PDF Extended History products and printed products wherever possible.

In the United States, the name Mullikin is the 11,484th most popular surname with an estimated 2,487 people with that name. [1]

Migration of the Mullikin family to Ireland

Some of the Mullikin family moved to Ireland, but this topic is not covered in this excerpt. More information about their life in Ireland is included in all our PDF Extended History products and printed products wherever possible.

Mullikin migration to the United States +

Mullikin Settlers in United States in the 17th Century

Mullikin Settlers in United States in the 19th Century