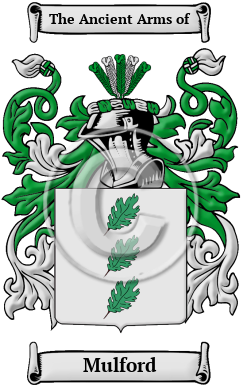 The lineage of the name Mulford begins with the Anglo-Saxon tribes in Britain. It is a result of when they lived in one of the various settlements called Milford in Derbyshire, Hampshire, Wiltshire, and the West Riding of Yorkshire, or in the place called Long Melford in the county of Suffolk. The surname Mulford belongs to the large category of Anglo-Saxon habitation names, which are derived from pre-existing names for towns, villages, parishes, or farmsteads.

Early Origins of the Mulford family

The surname Mulford was first found in Yorkshire where they held a family seat from very ancient times, as Lords of the manor of Milford, in the diocese of York. This did not appear in the Domesday Book in 1080, and it must be assumed that the manor emerged about the 12th or 13th century.

Early History of the Mulford family

Distinguished members of the family include Samuel "Fish Hook" Mulford (1644–1725), an American who went to London in 1704 to protest the tax on whale oil, which he used in farming. Warned beforehand of the sly workings of pickpockets in...
Another 39 words (3 lines of text) are included under the topic Early Mulford Notables in all our PDF Extended History products and printed products wherever possible.

In the United States, the name Mulford is the 10,183rd most popular surname with an estimated 2,487 people with that name. [1]

Migration of the Mulford family to Ireland

Some of the Mulford family moved to Ireland, but this topic is not covered in this excerpt. More information about their life in Ireland is included in all our PDF Extended History products and printed products wherever possible.

Mulford migration to the United States +

To escape the unstable social climate in England of this time, many families boarded ships for the New World with the hope of finding land, opportunity, and greater religious and political freedom. Although the voyages were expensive, crowded, and difficult, those families that arrived often found greater opportunities and freedoms than they could have experienced at home. Many of those families went on to make significant contributions to the rapidly developing colonies in which they settled. Early North American records indicate many people bearing the name Mulford were among those contributors:

Mulford Settlers in United States in the 17th Century

Mulford Settlers in Australia in the 19th Century